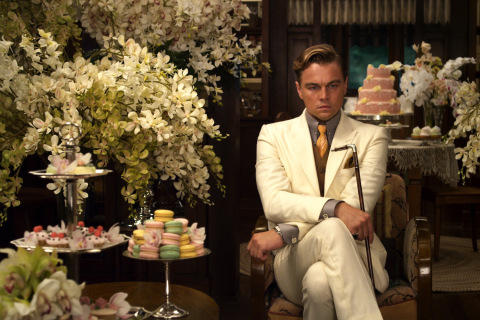 One of my favorites in Baz Luhrmann’s The Great Gatsby is the scene in which Gatsby is to meet Daisy at Nick Carraway’s cottage. I’ll not spoil the full effect of a nervous lover about to reunite with a lost love, but as in the novel, only the stripped away emotions matter in the end, the elaborate trappings unimportant to what counts. The scene is a metaphor for a director whose excesses are unnecessary, if not distracting, but whose film works in spite of, in this case, Baz Luhrmann. The strength of The Great Gatsby lies in the depth of the performances, not in garishness of its trappings.

Go for the performances

The motion picture, released today for general audiences in the United States, is not intended to be a book report. Film is its own medium and in adapting The Great Gatsby, known for its economy in crafting a narrative with no exorbitance, but with a scaffolding intended to support the reader’s imagination, Luhrmann’s movie should not be evaluated based solely upon fidelity to the novel. That’s not to say that fans of F. Scott Fitzgerald’s 1925 classic will be unduly disappointed by gross departures from the work – they shouldn’t be – but rather the film should be enjoyed for what it is.

My own greatest fear among many a trepidation held before watching a special preview on Tuesday was for Leonardo DiCaprio, an actor I’ve come to admire for his deliberate efforts to grow from his portrayal of the fictitious Jack in Titanic, regressing in talent. As the title character, DiCaprio brings to the roll maturity and a depth of emotion that does justice to the complex subject.

DiCaprio controls his action, the tempo of delivery and even his notorious furrowed brow as he obliquely reveals Jay Gatsby to the audience. He’s allowed such latitude in part because his performance is not called upon to carry that of other key actors. 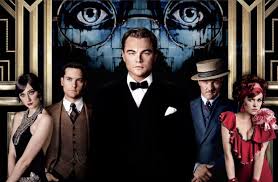 The other major parts played by Elizabeth Debicki as Jordan, Amitabh Bachchan as Wofstein as well as Jason Clarke and Ilsa Fisher who portray George and Myrtle Wilson are written almost superficially and through not fault of the actors, save one, the characters are mere props. Casting the beautiful Ilsa Fischer, (one of the top 50 most beautiful women in the world by some tabloid poll), was the lone mistake of selection. Her experience limited mainly to romantic comedies was not enough to pull off the hardened character of Myrtle, to date best interpreted by Shelley Winters in the 1949 Alan Ladd take on Gatsby.

The stunning Elizabeth Debicki turns in the strongest performance of those actors listed above, despite the sanitizing of both her and Daisy’s more flawed characteristics. Jordan is never portrayed as having ethical lapses in her golfing and Daisy is sympathetically designed as a victim, the only criticism offed by the narrator who recites from the novel how she and Tom destroy.

Tom Buchanan, played by the rugged Joel Edgerton, a great casting choice that contrasts with past portrayals of “one of the most powerful end that ever played” at Yale played by actors whose builds and demeanor suggested not brutality, but the meanest member of the debate team. DiCaprio and Edgerton create the building intensity so noticeably missing in other film version, yet indispensable in establishing the contested affections for Daisy, played by Carey Mulligan.

Mulligan’s Daisy Buchanan falls victim to the director’s penchant for ignoring the maxim less is more. Her own talents take the character beyond what any average talent could do and her chemistry with DiCaprio is conveyed through a subtle use of the eyes that avoids the impression of fawning. She does convey an appropriate adoration for her cousin who is pressed by Gatsby into arranging the initial reunion without Daisy’s knowledge.

Toby Maguire is not a poor choice for the story’s narrator, Nick Carraway, though the devise chosen to convey to the viewer the events of The Great Gatsby detracts from his character. The film opens with Nick recalling in what will become several flashbacks the circumstances that led to his commitment for morbid alcoholism in a rustic, lakeside sanitarium. He is attended by a fatherly Dr. Perkins, a character pretentiously invented apparently convey to literary fan’s the director’s knowledge of Maxwell Perkins, the Scribner editor who played such an important part in the shaping of Fitzgerald’s novel. This device serves as another distraction on the part of the director and traps the filmmaker into adding an unnecessary ten minutes to the story’s weak ending.

Painting The Great Gatsby into a corner

Adding to the story line that Nick Carraway is not only the narrator, but the writer of The Great Gatsby, is one of the greater failures in the movie’s construction. Nick recovers from the emotional damage that caused his drinking by putting to paper what he’s reluctant to share verbally with his therapist. I’m reminded of how coffee, not time and metabolism, relieves a human nervous system of intoxication. The premise necessitates at least one scene too many as the director drifts from the main theme of the film, but this is not the worst of Luhrmann’s impetuous failings.

As a grandfather, I’ve happily attended movies with my little girls who enjoy the choreographed actions of minor characters opening doors in perfect coordination of timing or peeling away from a scene like divers in an Esther Williams film. I don’t care for such effects in a movie made for those older than the lower primary grades. Luhrmann’s annoying tendency to choreograph the movement of extras, giving at times the feel of a Disney picture.

In a recent New York Times interview, Luhrmann unconvincingly defends his use filming in 3-D by claiming that Fitzgerald was a “modernist” and would probably approve of the use of the technology. Perhaps Luhrman reaches is conclusion about the author as it is a well established fact that Fitzgerald used telephones and traveled by car, not buggy. Beyond that, there exists no evidence that Fitgerald was given to randomly, carelessly tossing in new technology into the mix of his work. In fact, the opposite sees more evident. The choice of filming in 3-D was silly and viewers, even those accustomed to seeing comic book figures brought to film who appear to swing, jump and explode into the midst of the audience will find the 3-D choice a distraction from a film that did not require such nonsense.

Fitzgerald is known for his keen observations as a social historian, not only in Gatsby, but in his earlier works, particularly in his first novel, This Side of Paradise and a collection of short stories written in 1922, Tales of the Jazz Age, a term credited to the author. The Great Gatsby,  only nine chapters in length, is the product of an artist who painstakingly composed his novel with minimalist treatment of the story line and his characters. If anything, Fitzgerald purposefully stopped short of filling in ever detail of a character’s nature, especially and intentionally in the case of the title character.

In the same interview, Luhrmann explains, this time with some degree of plausibility, that his choice of modern pop-culture music was inspired by the director’s intention of letting the audience experience the new music of today, for which Jazz was at the time of The Great Gatsby’s writing. Film goers will recall Luhrmann’s earlier teaming with Leonardo DiCaprio in the modernized version of Shakespeare’s Romeo and Juliet, a work that received, at best, mixed reviews for the director’s judgement. Though the selection of songs by such contemporary artists as Jay-Z, Beyonce and Kanye West is not a distraction and will no doubt appeal to generations now too hip for MTV, the gimmick is no more than that – a gimmick.

The controversial score is not bad, as many claim, as an affront to “purists,” but an affront to those, like Fitzgerald, understand that all art must be seen as a response to the period. Had Luhrmann modernized The Great Gatsby, (a likely sequel potential for motives of exploitative quick money – a theme more connected to the novel than others by Luhrmann), the score, then in context would add value to the setting.

The director does deliver, though in several pivotal scenes, the drunken party held in New York by Myrtle’s enabling sister grows to a frenzy that will impress readers of the novel. As mentioned, the reunion scene is naturally humorous and captures emotions familiar with anyone who has ever known the awkward anticipation of love. The confrontation at the Plaza Hotel is riveting and serves to carry the tension into the climax.

Prone to tempation, novice cooks often and erroneously conclude if one teaspoon of salt is good, three tablespoons must be better. For many experienced chefs relegated by their limitations to mediocre eateries, the practice of covering well-prepared entrees with well-prepared sauces combines to lessen the quality of the meal. In both instances, some honest reflection results in self-improvement, and better food. For someone with the experience behind the camera as is the case with the director of The Great Gatsby, overdoing should have been purged several films earlier.

For those who appreciate the novel on any level, there awaits many good points to consider after watching The Great Gatsby. Members of younger generations newly exposed to the story of Gatsby will enjoy what is sure to be a summer blockbuster. It is the actors who carry this film and they do so in spite of a director who shows no promise of being more than a maker of popular, pretentious hits. That is his talent, but like the plodding cook, Baz Luhrmann is no artist.