Plenty of reading and plenty of coffee.

In my accidental series regarding what I learned writing about the Japanese surrender, the topic led me to a wide variety of sources. Several of these I consider invaluable for anyone wanting a more comprehensive understanding of the process by which the Imperial Japanese government surrendered. Not surprisingly, some authors come to completely different conclusions over such topics as the dropping of the atomic bombs on Japan, the Showa’s culpability in the conduct of the war and subject of my inquiry, what factors caused Japan to surrender.

The most reliable digital sources

In my opinion, the best source on the Internet is Doug Long’s, Hiroshima: Was it necessary? Straightforward, well cited and demonstrating a superior effort to avoid bias, yet with an informed thesis, the site includes a well-respected counter argument, also well researched, by respected historian, Gar Alperovitz. The context in which The decision to use the atomic bomb was written is that of the highly charged political response to the Smithsonian Institute’s retrospective on the 50th anniversary of the atomic bombings of Hiroshima and Nagasaki.

I specifically avoided the question as to the moral and military imperatives having to do with the decision to use nuclear weapons on Japan. My choice was driven by the mountain of evidence that it was a number of factors that led to Japan’s surrender. As a note to those who believe the myth “everyone felt a certain way back then,” the record is clear the military necessity for using the bombs was dismissed by some very well-informed military and diplomatic figures. However, my purpose was not to enter into a non-historical debate, hence my silence on the matter.

A number of sources I used were primarily about the atomic bombings of Hiroshima and Nagasaki. These sources are wide-ranging in nature and my research interest was narrowly focused on the Japanese military and government’s response to the introduction of nuclear weapons. Not surprisingly, there was great overlap in Japan’s reaction to the two atomic bombings and the dramatic effect of the U.S. Navy’s submarine, surface fleet and carrier-based air attacks that successfully blockaded the Japanese home islands.

I also steered clear of the invasion of Japan debate largely due to the serious misgivings of that invasion’s necessity by many top U.S. military commanders and senior diplomats at that time. Most commonly cited by those who opposed landing on the home islands was the evidence that the naval blockade made such a costly prospect wholly unnecessary as Japan was materially unable to continue fighting, even in a strictly defensive mode.

One counter to this position, perhaps the least examined facet of the Pacific War, was the fear by both Japanese and American officials of a communist revolution by the Japanese people, a possibility the Soviet Union would certainly have exploited had this occurred. This same concern, a very credible consideration, remains a supporting argument for the decision to use the atomic bombs before conditions in Japan worsened.

It became clear my prior understanding of why the Japanese government surrendered did not include even a rudimentary understanding of Japan’s flawed system of government since the Meiji Constitution of 1889, (implementation), hopelessly and intentionally compromised by militarists long before Japan’s nominal role as a member of the allied powers in WWI, accelerating with the onset of the Great Depression. This latter period is known for government by assassination due to the successful and near-successful political killings perpetrate by ultra-nationals with direct ties to the militarists. The threat of murder by members of the armed forces clearly cowed many, if not most, Japanese  politicians into either supporting or remaining silent on some of the nation’s most controversial decisions during the 1930s and throughout the Pacific War.

It is the certain knowledge of this political culture of mortal intimidation that clouds the last great mystery of WWII. To what degree was the Showa Emperor Hirohito culpable for his empire’s wars and war crimes?

As I delved into the research for my initially planned short post, each fact begged new questions, the answers to which were needed to explain the original quest as to why Japan surrendered. Three elements of my search had to be considered as context for any evidence presented on the many subjects.

The first of these was the period in which the claims were made. Any testimony given by Japanese officers and officials immediately after Japan’s surrender had to viewed in the context of a subject trying to ensure to a victor with expedient, ulterior motives that the Emperor would be seen as a helpless prisoner of the military rather than a war criminal. The primary message conveyed by those who gave testimony to Supreme Commander MacArthur’s investigating general, Bonner Feller, was that the Showa bravely risked death by opposing the war hawks, the holdouts to peace, by his stunning intervention during two Imperial Conferences during the four days between the bombing of Nagasaki and the Imperial Rescript ordering his subject to “bear the unbearable.” The failed coup on the night of August 13-14 only reinforces that theme. 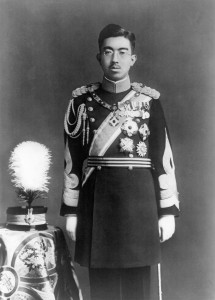 However, there exists a number of respectable scholars, Herbert Bix chief among these, who argue the Showa was anything but a puppet of the militarists. This presents the second element of concern – overt academic bias by the authors of many of these works.

The strong sense of justice, while commendable on the part of the authors, unfortunately has led to lapses in verifiable citations of the most damning claims. These assertions, such as the Showa’s alleged rescript to Japanese civilians on Saipan to commit suicide rather than surrender to the Americans, is so tempting to accept, and yet so apocryphal in its construction.

Given the U.S. Navy’s remarkable feat of continually breaking Japanese code, the absence of records documenting the Showa’s direct link to any such order, while not disproving the claim, fails to meet the standard of proof expected of credible historical evidence.

A cautious venture into the working of another culture

Finally, not being a scholar of Japanese culture, I cannot possibly recognize, let alone interpret, the nuanced meanings of claims, context and events stemming from such a culture as that of Japan. This underscores the need to seek out a wide variety of sources, including those in languages we don’t speak. While there will always be some loss in translation, we can’t ignore such sources due to the feeling uncomfortable, even vulnerable, because of what we don’t know or understand as is so often the case with expanding our curiosity into other cultures.

Still, these translated interpretations are still just as subject to bias and propaganda as any elucidation of the past. Both the Japanese generals, admirals and government figures trying to paint their emperor as faultless in the conduct of war used the argument that Americans could not possibly understand the hidden meaning in Japanese actions. This argument was willingly accepted by Bonner Fellers’ investigators, anxious to provide Washington, via MacArthur, what we might today call plausible deniability for the Showa.

In the end, I repeat my belief it will be years before a satisfactorily comprehensive number of histories can be written as to why Japan capitulated.

In closing, I also recommend the following books I consulted as my research took on a life of its own.

From the Time-Life WWII Series:

The Rising Sun, 1977, by Arthur Zich and the editors of Time-Life Books

The Secret War, 1981, by Francis Russell and the editors of Time-Life Books

The Fall of Japan, 1983, by Keith Wheeler and the editors of Time-Life Books

Books I intend to read on the subject:

Racing the Enemy: Stalin, Truman, and the Surrender of Japan, 2005, Tsuyoshi Hasegawa