As is the case for many if not most new bloggers, the first year provides many posting opportunities not recognized until any timeliness is lost. That doesn’t take away from those well-timed posts that were made, but it does provide a nagging sense of unfinished business.

Over my winter break from teaching I began slowly, haphazardly at first, to accumulate a small listing of historical event dates for topic consideration. At first I began to add a few dates to my blog’s appointment calendar, transferring notes scratched out on scraps of paper or yellow Post-it-Notes® into events with reminders of several weeks for research. Soon, however, the occasional entries became more numerous taking up 10-15 minutes at a time.

Scraps of paper that once had room for many more suggestions began to run out of white space. The casually organized columns of entries began to develop perpendicular listings. Just before all usable space was depleted, event ideas could only be read by turning the scrap upside down in order to view notes clearly made in great haste, though I can’t imagine what pressing matters resulted in such frenzy.

This morning’s single entry may subconsciously mark my own growing satisfaction of my collected dates. As of this morning I have 39 entries, the most recent being the date in 1858 when the first transatlantic cable was completed. (It soon broke.) As this event was as significant then as the launch of Netscape Navigator was more than a century later, the date seems a likely topic for a blog titled History as Prologue.

A sampling of historical topics

Each month of 2013 has a minimum of three historic events. May, August and November each share five notable dates apiece. Next month includes the centenary of what became known as the Armory Show. The following month marks another solemn anniversary of the Triangle Shirtwaist Company Fire. Several common themes begin to appear over the course of the year. 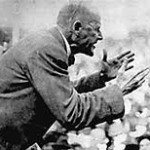 Labor history and women’s rights are recognized under the broader civil rights category. The Pullman Strike, featuring Indiana labor leader Eugene Debs, and the Haymarket Riot  join the Triangle Fire as partial background on the struggle for worker rights. The Seneca Falls Convention and Dublin, Indiana’s own women’s rights conference denote another chapter in the history of civil rights.

Historic events with both national and local implication run from the Northwest Land Ordinance of 1785 to the many conflicts between Native Americans and the United States Army. One of these battles saw the lopsided victory by Indians over soldiers during George Washington’s first term as president. The loss of life among the federal forces was nearly three times greater than that of the much better known Custer’s Last Stand that occurred some 85 years later.

Indiana’s bicentennial will be celebrated in only three years. One of five states created from the original Northwest Territory, (Indiana stemmed directly from what had become the Indiana Territory following Ohio’s admission to the union), the Hoosier State’s past is marked with proud accomplishments and dark tendencies. Many of these stories I’ve known from my youth and others will require no small amount of research on my part, tasks I to which I look forward.

Political events at the state and federal level will no doubt provide instances where history will at once come to mind save for those revisiting mistakes made by others.

My blog title is, of course, a play on Shakespeare’s line from The Tempest, “What’s past is prologue.” Each current event has several preceding episodes that foretell, if not outcomes, then risks and rewards.

My hobby is a labor of love that sometimes grows into work. From that work I grow as a teacher; from that work my appreciation for the interpreting the present through knowledge of the past also grows. I hope you, the reader, find value in these posts.