The Niagara Movement is often described as the forerunner of the National Association for the Advancement of Colored Persons, NAACP, which is not untrue. However, the 1905 gathering began as in response to another movement launched a decade earlier.

The July 11 inaugural meeting was held in Fort Erie, Ontario, near the famous falls for which the movement takes its name. The participants were all men, notable African-American professionals from the United States. While the group met in response to Jim Crow, perhaps the driving reason for the meeting was to counter another African-American philosophy promulgated a decade earlier. Teaching about these two movements is particularly helpful for curbing the myth that African-Americans – or any population – embraces monolithic world views.

Much has been made of the motivation behind W.E.B. Du Bois and his fellow intellectual’s choice of the Canadian location for the meeting, opposite Buffalo, New York. Segregation in public transportation and accommodations were commonplace in northern cities, but no definitive evidence is known to cite this as the reason for meeting in Ontario. 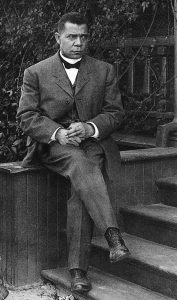 A dozen years Du Bois’s senior, Booker T. Washington was arguably the dominant figure if not voice of America’s African-American community. At the turn of the 20th century, ninety percent of African-Americans lived in the South, three-quarters of these in rural settings. Washington, among the last generation born into slavery, was intimately aware of the issues facing southern African-Americans. His background almost certainly shaped his views when he founded Tuskeegee University in 1881, (largely by his own force of will).

In 1895, Washington was asked to speak at the Cotton States and International Exposition, held in Atlanta, Georgia. To a mostly white audience, Washington outlined his vision of racial equality without committing the unpardonable faux pas of mentioning by name that end. His address spelled out a South in which African-Americans continue to bear the humiliating conditions of Jim Crow, all the while improving themselves in the technical skills of the day. His views of what the U.S. Supreme Court would describe a year later as a separate but equal society was widely applauded by Southern whites, still resentful for the injuries they perceived as having suffered during Reconstruction. To a large degree, Washington believed that Reconstruction was a failure for seeking too much too soon for African-Americans.

In the North, however, African-American intellectuals were aghast at the very idea that American citizens of color accept second-class status in favor of the prejudice culture that truly had meted out real injuries for nearly 300 years. Chief among Washinton’s critics was W.E.B. DuBois who earned his Ph.D. from Harvard the same year in which the Atlanta Exposition speech was given. 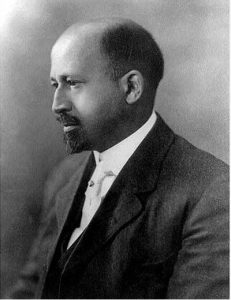 William Edward Burghardt Du Bois was born in Massachusetts only three years after passage of the 13th Amendment. He grew up without the presence of his father and his mother died during his late teens. Though not affluent, Du Bois was recognized by others for his intellect and received support for his first undergraduate degree which he earned at Tennessee’s Fisk University.

W.E.B. Du Bois traveled to Berlin for continued studies, earning his second bachelor’s degree, this time from Harvard University. He also traveled to the Deep South where he experienced Jim Crow firsthand. Still, his experiences were those of an academic which may explain some of his views that were antithetical to those of Booker T. Washington.

Not surprisingly, racial violence against African-Americans increased and became quite common following the end of Reconstruction. However, the 1890s is recorded in history as the height of lynching. It was during this infamous decade that Washington offered his controversial vision of harmony, albeit one dependent upon African-Americans accepting an institutional denial of civil rights.

Other Southerners of color were already agitating for immediate protection of civil rights for African-Americans. Like Washington, Memphis journalist Ida B. Wells was born into slavery during the first full year of the American Civil War. In 1892, white mob violence prompted by her writings on racial violence led to Wells’ permanent relocation to Chicago. There she crusaded against lynchings.

If Washington’s 1895 speech was truly intended, even indirectly, to curb lynching, it did not. Though prior to the Niagara Movement’s beginning, Du Bois and others had already criticized the Atlanta Exposition Speech, effectively painting it as the Atlanta Compromise Speech, a bloody race riot in the Georgia capital the following year had the effect of mocking Washington’s views.

Although there were many such acts of lethal violence against African-Americans, one is recognized as fraught with a particularly dark irony as to prompt DuBois and white reformers to launch the NAACP, thus ending the brief period of the Niagara Movement.

It was not lost on most that racially motivated murder and widespread destruction of property in Lincoln’s adult hometown was beyond shocking. As was so often the case, accusations of rape committed by African-American men enraged segregationists in both the north and south. When two men were accused of sexually assaulting a white woman, a mob descended upon the local jail. There the would-be vigilantes discovered that the suspects had been moved to a secret location. Their blood lust unsatisfied, the lynch mob murdered to innocent men, one allegedly selected due to his thirty-year marriage to a white woman.

Other African-Americans were murdered, though the rage only grew among the reactionary whites. Homes and businesses belonging to formerly enslaved Americans and their descendants were burned, forcing what is estimated as two thousand African-Americans to flee the state capital, many never to return.

Accounts of the Springfield Race Riot stirred reformers such as Jane Addams and African-American crusaders against violence such as Du Bois and Wells to form the NAACP.