Growing up where I did, I find it hard to imagine that I wouldn’t be deeply drawn to American History, and yet, few others who shared the same geographic circumstances of my childhood are similarly inclined. I was surrounded by physical reminders of some of our nation’s earliest and most significant developments and those places were part of my boyhood playground.

Two hundred or so yards north of my boyhood home runs a two-lane secondary route that bears the name Boundary Road. While it’s unlikely 1-in-10 who now travel that pike know the significance of its name, the referred-to boundary is none other than the line marking the 1795 Greeneville, (Ohio), Treaty Line that marked what was, for the moment, the western most limits of post-colonial American settlement.

From an early age I was aware of the events that shaped my local landscape. It’s likely that I read as a fourth-grader the summary details of how, one year after the Battle of Fallen Timbers in which General Mad Anthony Wayne, serving at the pleasure of President George Washington, defeated the Shawnee Chief Blue Jacket’s confederation of several tribes, negotiated what was the beginning of the end for Native American control of Ohio, and later, Indiana. The treaty, however, was not the end of hostilities over dominance of the lands upon which would become my home.

To the south and west of my family’s home were the remains of a stockade fort hastily constructed in 1813 during the War of 1812. Located on high ground about a mile east of what is now the town of Fountain City, Indiana, the fort was one of 13 such bastions meant to provide expedient shelter for the local white residents in case of Indian attack, which never materialized. The fort subsequently fell into disrepair and while my grandfather, born in 1899, recalled seeing the log ruins of the old stockade, only a few locally-fired bricks remained for my viewing. 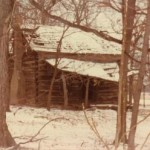 North of my home by not more than two hundred yards was the old log cabin, allegedly built by the pioneer John Starbuck around the year 1805. It was for Starbuck and his fellow pioneers that the stockade was constructed.  He and his family took advantage of the affordable prices offered by the federal land office and braved, depending upon your perspective, hostile Indians, isolation and a decided lack of creature comforts in the lands less than a mile from the Greenville Treaty boundary. It was in the neglected, but still intact cabin that I, wearing a modified coon-skin cap and toy musket ventured having watched Fess Parker starring on TV as Daniel Boone, whose real-life ventures occurred not 40 miles to the east of my home.

These were the scenes of my formative years. One of only two homes on our, then, gravel road, the nearest children my age nearly two miles distant, I entertained myself by playing in the woods that surrounded my home and ran south and west for more than a mile. The memories of my adventures are pleasant and what adult doesn’t build from and return to the good moments in his or her life as they make sense of the world? This is the aim of my blog and I’m happy to share the past and my own interpretation of meaning that past has on current events.