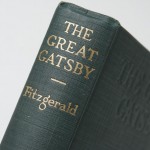 To set the record straight, there are, counting the DiCaprio version, four big-screen versions of The Great Gatsby. There is, however, a fifth counting a 2000 made-for-TV version that I’ve not seen. I do intend to see this if only because one of my favorite actors, Mira Sorvino, plays the part of Daisy Buchanan. If anyone can pull off a strong performance of such a nuanced character, it would be Mira Sorvino.

For the record, there was a 1926 version of The Great Gatsby, a silent film that, like so many of the silent films, has been lost with no known surviving copies. From most accounts, the film wasn’t much good, still we’d like to be able to judge for ourselves the first movie version released the year after the novel’s publication.

The best known to date version remains the 1974 Robert Redford vehicle and I’ve expended about as much effort on that version as the movie deserves – probably more. For this post, I want to focus on the 1949 version starring an impressive cast, including Alan Ladd, an actor who captures with some license the real essence of Jay Gatz.

The name is Gatsby. Jay Gatsby.

While that paired dialogue isn’t heard in Elliott Nugent’s 1949 noir version of The Great Gatsby, there are undertones in the film familiar with fans of the James Bond franchise, and for good reason.
Screenwriter and producer of the ’49 Gatsby film Richard Maibaum went on to become the principle writer for the James Bond franchise, adapting from Ian Fleming’s books all but the last several Bond pictures until his death in 1991. It is Maibaum’s strength as a writer that gives this black and white film one of its many substantial considerations.

Gatsby, and there seems to be a strong consensus about this, is a very difficult book to interpret as a motion picture. While this version makes no pretenses as to its fidelity towards the novel, I believe it remains the work that best treats Fitzgerald’s characters with understanding. 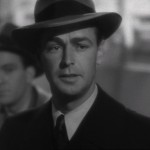 A Paramount Studios picture, The Great Gatsby of 1949 featured the studio’s undisputed top leading man, Alan Ladd, perhaps best known for his starring role in the Western classic, Shane, film buffs also know Ladd for his roles in hard-boiled Film Noir classics in which he played private eye and gangster roles. Of this genre his pairing in several films in the early to mid-40s with the sultry Veronica Lake, (Jessica Rabbit, the cartoon bombshell in Who Shot Roger Rabbit? is modeled after Lake). Ladd’s gangster pedigree is emphasized in the Jay Gatsby character, only a small stretch from that portrayed by Fitzgerald.

The film opens with a take on the final chapter of The Great Gatsby. In the opening scene the viewer is made aware that the film does not follow the book’s plot. It is 1948 when Nick, (MacDonald Carrey), and Jordan, (Ruth Hussey), return to Long Island to pay their respects at Gatsby’s inconspicuous grave marker denoting his death in 1928, six years later the novel’s setting.

The scene, through a series of flashbacks, recalls the images of the Roaring Twenties, particularly the various dances and the “wild” rhythms of Jazz music popular both before and during Prohibition. It is in the brief collage of scenes depicting the illicit activities resulting from Prohibition that Gatsby is introduced, a steely, unsentimental gunman among a gang of bootleggers. Gatsby is portrayed killing with his revolver two rival bootleggers during a running gun battle between two cars carrying gangsters. The film is unambiguous as to the source of Gatsby’s wealth, again, a major departure from the novel.

Ladd carries on throughout the film as the ambiguous hero yearning to recapture his lost love, Daisy, played by Betty Field. Like the novel, Daisy betray’s Gatsby’s affections when faced with criminal charges, retreating to her husband’s dubious moral code and wealth. After a good night’s sleep, however, Daisy’s character is once again made sympathetic to the audience by her insistence that Tom make her strong and unselfish, a Hollywood nod to the limits a female star can fall from grace.

The subject of the tragedy that tests the main character’s integrity is the accidental death of Myrtle, played admirably by the wistful attractiveness of Shelley Winter, a Hollywood beauty in the 40s and 50s. It’s hard to imagine another actress bringing to life the essence of Myrtle, both victim and mercenary. Winters, not surprisingly, went on to earn two Academy Awards during her career. She is spared the broken nose at the hand of Tom, but she does not escape the front right bumper of Gatsby’s bright yellow Rolls-Royce, (a 1922 Rolls-Royce Silver Ghost is described, though not by model, in the novel). 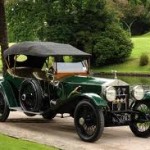 Based upon Fitzgerald’s description of Gatsby’s Rolls-Royce, the model may well have been the 1922 Silver Ghost, pictured here in green.

Even Gatsby, in his final scene, reveals to the camera and to Nick that he’s turning over a new leaf, forgoing all the riches and trappings of his ill-gotten success. He’s going to face the music for the death of Myrtle, despite his innocence in her death. Like Gatsby, he’s unable to accept that his romance with Daisy is a fleeting grab at the past. The scene is not worthy of Fitzgerald’s ending, but more a Hollywood device to show a fit Ladd in trunks lounging by the pool. (Ladd was a star athlete at track and swimming during high school.)

In writing this post I again watched the YouTube episodes of the ’49 Gatsby. For me, old boy, it represents the standard against which all film versions should be judged. 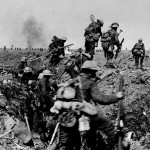 There is certainly room for improvement where bringing The Great Gatsby as a treasure of American fiction is concerned. The central theme of how The Great War served as a coda for one age, ushering a metaphysical void in the lives of those whose generation fought the global war.

The Great Gatsby’s value as a work of social history has not received a worthy treatment on film. Fitzgerald’s painstaking care to build into each character a criticism of the times has escaped all attention, so far, by film makers. Trying to keep an open mind before next week’s opening of the Baz Luhrmann film, I hold out some hope that the trailer’s brief war scene may address this daunting element. I won’t hold my breath, however.