A sobering sea change in attitudes about drunk driving 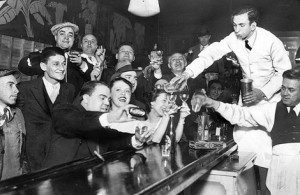 A fellow blogger celebrated the 16th of January’s significance as the day the nation went from dry to wet. The 21st Amendment repealed prohibition, one of the few progressive cures, I would argue, that produced as many or more ills as it remedied. In a balanced response to this happy event in 1933, the serious issue of drunk driving accompanies the enjoyment of spirits. Unlike Prohibition itself, however, a much later progressive movement to address the carnage caused by drunk driving was dramatically successful and saw gains in roughly the same amount of time as America spent while officially dry.

I enjoy following several personal blogs including several from the Indianapolis area. One of these is A Grave Interest, a good find for those who, like the blog’s owner, Joy Neighbors, and I find fascinating the lure of an old cemetery and the tales each has to tell. Ms. Neighbors also writes Joy’s JOY of Wine, a topic with plenty of historical ripeness of its own. It was in this particular blog where I read the article celebrating the end of Prohibition. Her writing soon became the topic of a LinkenIn Group, (American History), discussion thread in which some mention of alcohol abuse naturally ensued.

As I read through the comments, I was reminded of how, in my own life, a true sea change in attitudes towards drunk driving have changed.

In my mid-30s, while an undergraduate, I covered an “after-prom” party for the small newspaper I ran. When the local high school guidance counselor informed me of such an event, I fought off a visible eye roll as I remembered the bacchanalia that, if not practiced, was at least desired by most prom-goers in the late-70s. I anticipated a half-dozen dateless students and their mothers showing up after holding up the walls during the actual prom. However, something in society had changed in the decade or so since my graduating class held its prom. Something good.

As a young adult, drunk driving was viewed with roughly the same concern as J-walking or forgetting to pay a library fine. Today, such a concept is rightly viewed as irresponsible, dangerous and just plain dumb, and so I’m sharing this not as a defense, but as a point of historical perspective.

Prom activities, before, during and after, commonly involved alcohol use and abuse. While prohibited, such behavior was most often subject to salutary neglect by parents and police. It was a general practice for police to escort home drunken high school seniors or juniors on Prom Night. It was also the norm that over 50 thousand people died each year from drunk driving incidences.

When I attended the after-prom event, I was pleasantly stunned to see more than a hundred students – the size of a graduating class in my school – enjoying a full night of games, music, parent-prepared snacks and plenty of drink, all non-alcoholic. I helped clean up after about 4:30 a.m., not long after still more than half the peak attendance finally began to head home. Though I’d not realized the huge shift in societal norms as it occurred over roughly a dozen years, I could not deny its effect or the leading force behind the change.

From a senseless death to a successful movement 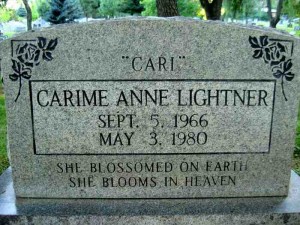 M.A.D.D., Mothers Against Drunk Driving, deserves full credit for turning around during the 1980s the attitudes, and then later, the laws about drunk driving. Organized in 1980 following the death of M.A.D.D. founder, Candy Lightner’s daughter Cari, a crusade to reform drunk driving laws across the nation emerged with, at first, a single image of one innocent victim. That image was joined by others at an exponential rate that resonated with Americas. No longer were drunk driving deaths accepted as regrettable statistics affecting other people’s lives.

As awareness of every death and every maiming at the hands of drunk drivers transformed from a number to a face, attitudes and behaviors began to change. As the drinking public soon became more cognisant of the potential, if not likely results of drinking and driving, the faces of victims began to morph into images, not of strangers, but of known loved ones. From that nexus of awareness and knowledge came political power. Politicians now had a highly motivated, well organized interest group that would publicly support tough new laws, penalties and enforcement standards. This spectrum of voters would be equally public in shaming politicians who acted in ways that supported the status quo.

Since the formation of M.A.D.D, laws across the nation have been enacted in the effort to eliminate drunk driving. Some of the more notable changes have been:

Are we there yet?

In 2013, regardless of generation, those of us who enjoy a good beer, a perfectly made martini or a wonderful glass or two of wine – especially while among great company – never worry about a negative stigma attached to caution where drinking and driving are concerned. No one of any breeding pressures others to have :just one more.” Designated drivers really don’t drink and enjoy full membership of any merrymaking group out on the town. Peer pressure is now on the side of sober driving, a critical gain given the statistics showing how one-in-three persons involved in fatal crashes with a blood alcohol content greater than .08 percent were between the ages of 21-24. 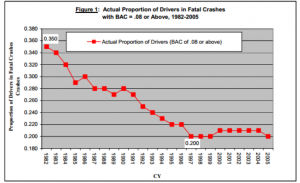 I’ll cheerfully drink to the end of Prohibition; I’ve celebrated much, much lesser events with a toast. Seldom one to avoid a call for a new toast, I’ll offer one shared by most.

We’ve accepted less death and less mayhem at the hands of impaired drivers. Here’s to the next push where we accept nothing less than an end to drunk driving!

The author, (right), shares a toast with his buddy Errol.