Today, the beaches of Biloxi, Mississippi are temporarily closed in response to the Novel Coronavirus pandemic. But until the late 1960s, nearly all of Biloxi’s twenty-six miles of public beaches were open to all but African American citizens. This closure to some was not temporary, but rather one of the scores of racial restrictions throughout the country, particularly in the South known as Jim Crow. A local doctor and Boy Scout leader set about to change that injustice. Over a period of four years, African Americans engaged in several peaceful gatherings at the beach that became known as the Biloxi Wade-Ins. However, on April 24, 1960, violence committed by white mobs, tacitly permitted by local police, was the unanticipated response that Sunday.. 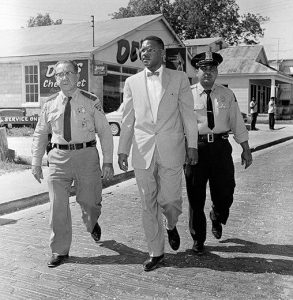 Gilbert R. Mason, Sr. M.D. wasn’t new to fighting segregation. On May 4, 1959, he led the first of several direct-actions against racial segregation of public property. Local police detained Mason, hauling him to the local city building. There, Mason demanded to know what law he was violating. When police officers failed to specifically name any such law, local elected officials offered the claim that the beachfront wasn’t public and that local property owners had the right to restrict access to minority citizens. In support of that narrative, a powerful, taxpayer-supported organization worked behind the scenes to resist civil rights reform.

Shortly after the U.S. Supreme Court’s unanimous decision in Brown v. Board of Education, former Confederate states saw the formation of semi-private commissions whose goal was to marshal resources to deny efforts to desegregate the country. The Mississippi State Sovereignty Committee earned an infamous reputation for its activities during its twenty-one-year tenure. Already active in supporting efforts to ignore the desegregation of Mississippi’s public schools, the group took up the cause of denying African Americans access to Biloxi’s 26-miles of gulf coast beaches. There was, however, a fatal flaw in their argument, one well known to Doctor Mason and practically everyone on either side of the issue.

In the early 1950s, the U.S. Army Corps of Engineers conducted a tax-payer-funded erosion control project on the beaches of Biloxi, Mississippi. Those beaches included a segregated section for African Americans about ten miles from the most desirable beaches near Biloxi’s downtown. Mason and others petitioned the county commissioners to desegregate the beaches on these grounds. This attempt at redress went nowhere.

On Easter Sunday, April 17, 1960, Mason and Dr. Felix Dunn of neighboring Gulfport, Mississippi, walked down to the whites-only beaches of Biloxi. The police arrested Dr. Mason as a “repeat offender” though Dr. Dunn was not officially arrested. One week later, a group of over one hundred activists conducted the biggest wade-in protest to date. Absent from this protest was Felix Dunn. 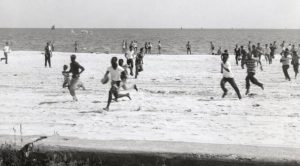 With police standing idly by, groups of local white thugs attacked the demonstrators. First-hand accounts from the time describe chains, brass knuckles, and bats as the weapons of choice used by the mobs as they battered men, women, and children alike. When African American families and individuals fled the violence on the beach, small clusters of whites pursued them on the streets of Biloxi. Dr. Mason personally treated the wounded. Then the sun set.

That night, armed groups of whites drove through Biloxi’s African American neighborhoods, a scene played and replayed since the end of the Civil War. The roving segregationists fired their weapons into the air, and in some instances into the bodies of the residents. Vile epithets and obscene warnings intended to intimidate the city’s non-white citizenry filled the gulf air that night. No deaths were reported but a number of injuries were recorded including eight gunshot wounds. However, the violence had an unintended consequence.

A stiffened resolve for justice

At the local level, a branch of the NAACP formed in Biloxi. Dr. Mason became its first president. The next month, the United States Department of Justice brought suit against the City of Biloxi for denying African Americans their right to use the beaches secured by federally funded erosion dollars. The suit was supported by more than seventy, signed depositions collected by the state’s NAACP field representative, Medgar Evers.

When the City of Biloxi continued to stall the federal suit to compel desegregation, Dr. Mason organized yet another wade in, this one held without incident on June 23, 1963.

A time of sacrifice and betrayal

Mississippi contributed its own dark accounts to the memory of the civil rights movement. Emmet Till’s mutilated body was pulled from the Tallahatchie River in 1955. In June of 1964, three civil rights workers were abducted and murdered in the Magnolia State. Two weeks before the final wade-in at Biloxi’s sand beaches, an avowed racist’s bullet tore through Medgar Evers’ body in the NAACP worker’s own driveway.

Perhaps another reason the Biloxi Wade-Ins aren’t better known is that they were locally organized, (thought the state’s NAACP did provide valuable assistance in the lawsuit against the city). Dr. Mason initially recruited activists from his own Boy Scout Troop. While the lunch counter sit-ins spawned the Student Non-violent Coordinating Committee and the Congress of Racial Equality organized the Freedom Riders, Biloxi’s stand against racism was truly homegrown.

Memory can be disappointing. As academic interest in the Wade-Ins grew over the years, a betrayal came to light. Dr Felix Dunn’s livelihood was not limited to just his medical practice. He augmented his income from the lucrative business of slot machines.

As a reward by the Mississippi State Sovereignty Committee through its local interests, Dunn informed on the civil rights activists, especially his fellow physician, Gilbert Mason, competing vendor’s gambling machines were removed from beachfront establishments and Dunn’s were installed.

As for the beaches, a federal court ruled in 1967 that Biloxi’s beaches were, indeed, public and therefore could not be segregated. Today, the city’s beaches are popular with African American bathers from across the country. Many who visit already know the struggle fought that allows all persons to enter the Gulf of Mexico’s waters from the beaches. Others may not know anything more than recommendations from friends. It’s unlikely, though, that those vacationers leave without having learned of an important series of events in the modern civil rights movement.