“I have always considered Saipan the decisive battle of the Pacific offensive.” 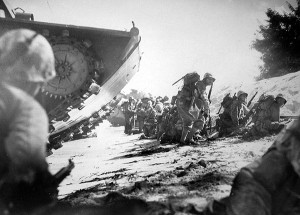 Like millions from many nations of the world, I followed the generally good coverage of the Normandy invasion’s 70th anniversary. Since that day in 1944, the landings in France have been known as D-Day. Practically every in-depth report and panel discussion commemorating the allied assault on Fortress Europe took time to acknowledge their were other D-days during the war and even during the month of June. The invasion of Saipan, nine days after the better known D-Day received its share of mention in the coverage of the European ceremony, but as it was in the last full year of World War II, the battle was overshadowed by the battles in France. But understanding the significance of the Battle of Saipan is as crucial to understanding the Pacific war as recognizing the importance of D-Day for the fighting in Europe.

Just as Operation Overlord, (the military code name given to the landings in Normandy, France), was the opening of second front against Germany, Operation Forager, (which involved a series of battles in the Mariana and Palau island groups), began a complementary drive across the Central Pacific to MacArthur’s push to the southwest towards the Philippines.

Though the main islands of Japan had been bombed by the new B-29 Superfortress heavy bombers base in mainland China, the effects were limited by distance and logistics. Imperial Japan’s main line of defense against the massive technological superiority of the United States was its ring of well-defended island bastions in the Central Pacific. Of  these, Guam, Tinian and Saipan were the most significant.

Prior to the invasion of Saipan, the Japanese High Command assumed the Americans would first invade Peleliu in the Western Carolinas before attempting to crack Japan’s inner ring of defense.  But when Marine Lieutenant General Holland M. “Howlin’ Mad” Smith commanding an amphibious corps consisting of three divisions, the 2nd and 4th Marine and the Army’s 27th Infantry Division, appeared off shore, the Japanese reacted with confidence in spite of the surprise.

Saipan and the certainty of Japanese defeat

Unlike Operation Overlord, sea and air battles were a decisive aspect of the battle for Saipan. When General Eisenhower gave the fateful order to proceed with the cross-channel landings, the Luftwaffe had been practically cleared from the skies over the Normandy beaches. Only one allied ship was lost to a single U-boat attack, In the Pacific, though, the Imperial Japanese Fleet remained a dangerous factor, despite its stunning loss at Midway two year earlier.

On Saipan, the defenders confidently waited the Imperial Fleet to destroy the American invasion fleet and then land troops and supplies to wipe out the Marine and Army forces.

With two new battleships and it’s powerful carrier-borne air arm, Japanese military planners were anxious to strike the Pacific Fleet and deliver a crushing blow that would stop the American advance. Upon learning of an American invasion fleet off the shores of Saipan, the Japanese Navy sent a massive armada, nearly every Japanese warship in the Southwest Pacific, steaming to attack the American 5th Fleet. The result was the Battle of the Philippine Sea.

Nicknamed The Great Marianas Turkey Shoot by the American pilots that decimated the attacking Japanese aircraft with a 10 – 1 kill ratio, the battle severely crippled the Japanese fleet. Not only were nearly 650 Japanese aircraft destroyed, most of the remaining veteran pilots died either in aerial combat or on one of the three fleet carriers sunk by U.S. Submarines during the battle.

After days and then weeks of waiting for the Imperial Fleet to arrive, even the most junior Japanese defender correctly concluded that help would not arrive and that Saipan would become their tomb.

Victories paid for in blood 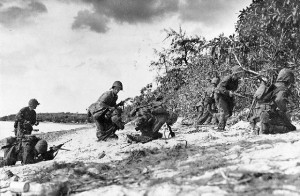 Two Marines are hit by enemy fire as others continue the assault. SOURCE: Official USMC Photograph

Once again, comparisons between the two D-Days can be made. In terms of lives lost on the initial landings, the 2500 allied dead at Normandy exceeds the estimated 2,000 total U.S. casualties suffered during Saipan’s D-Day. By the battle’s end, however, over 10,000 casualties, including 3,400 dead was the American cost in blood for taking the island. Nearly all of the 30,000 Japanese defenders died, with less than 1,000, mostly wounded Japanese prisoners taken. Another grim accounting included more than 5,000 civilian deaths. 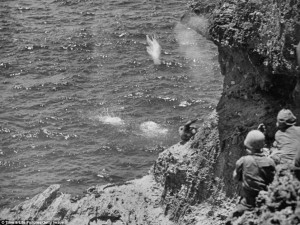 Over 1,000 Japanese civilians jumped to their deaths rather than surrender to US forces.

During the final days of the battle, more than 1,000 terrified Japanese civilians shocked even the battle numbed marines and soldiers by jumping to their deaths from the steep cliffs at the islands northern end. Entire families died together having been told by Japanese soldiers that Americans would torture, rape and kill civilians. Many also died when Emperor Hirohito, disheartened by early reports of civilians seeking protection by Americans from the fighting, communicated a decree that civilians should commit suicide rather than surrender to the Americans. 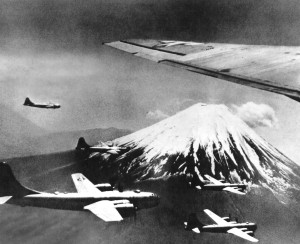 Following the capture of Saipan, Tinian and Guam in the Marianas, B-29s bombed Japan at will.

This was Emperor Hirohito’s bleak statement to his cabinet when told of Saipan’s fall. Though Tinian and Guam would not fall for another six weeks, the emperor was well aware that the Japanese home islands would soon be subjected to unrelenting devastation brought by B-29s flying from new airfields in the Marianas. The civilian population that had been told only of Japanese victories against the Americans could no longer be lied to about the fate of the war.

Prime Minister Tojo, the militarist who’d guided his nation to war, resigned along with his entire cabinet after Saipan’s loss was acknowledged.

In the final days of the battle, Admiral Chuichi Nagumo, commander of the Japanese carrier force that struck Pearl Harbor, committed ritual suicide outside the mouth of a cave on Saipan. Nagumo had been assigned to command all naval air forces stationed on Saipan.

Both the Normandy and Saipan invasions flung open the doors to ultimate victory in their respective theaters of war. Both events would be surpassed in ferocity, carnage and loss of human life before victory in Europe was declared the following May and Japan’s unconditional surrender executed at Tokyo Bay on 2 September 1945.

In the Pacific, Peleliu, the Philippines, Iwo Jima and the massive invasion of Okinawa, (the largest amphibious invasion in history), were still to come. There would be one final, major naval engagement between the Americans and Japanese, the Battle of Leyte Gulf, but the Japanese losses suffered in June of 1944 combined with tactical errors on the part of the Japanese commander, would make this the last significant sortie by the shattered Imperial Fleet.

By mid-summer of 1945, B-29 raids on Japan had virtually eliminated entire major cities, killing hundreds of thousands of Japanese civilians. American submarines had swept clean the Pacific Ocean of nearly the entire Japanese merchant fleet whose raw materials, especially oil, and food for the population, Japan was dependent upon for survival and the continuation of war.

Still, not until two atomic bombs were dropped on Hiroshima and Nagasaki, (from B-29s based at Tinian), and the entry of the USSR in the Pacific War did the Emperor finally order his government and the military to surrender.

Though the Battle of Saipan is generally less known than MacArthur’s return to the Philippines or the island battles for Iwo Jima and Okinawa, the successful amphibious landings on D-Day for the Saipan operation is worthy of remembrance with the more famous D-Day in Europe.