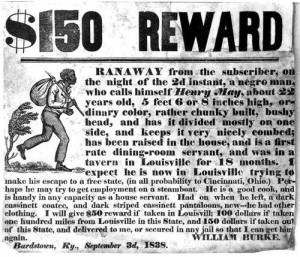 The Ohio River separates Indiana from the slave state of Kentucky however, in 1831 it did not insulate the former state from the inherent issues surrounding the institutional bondage of human beings. Regional and interstate tensions were already straining relations on the border of Free and Slave states by the time blood of both blacks and whites stained the soil of Virginia.

For those seeking to escape slavery by flight, northern, Free states offered isolated pockets of fleeting safety despite being subject to state and federal fugitive slave legislation. Indiana, a state mostly populated from south to north by residents from slave states, was not neutral towards the plight of fugitive slaves or free persons of color by the time of Turner’s revolt. The news of the violence in Southampton, however, accelerated the growing conflict between a majority of citizens and abolitionists, a small but zealous minority even among those who opposed slavery on moral grounds.

The 1830 federal census lists as living in Indiana some 3,629 free colored persons. While that number had grown by only 1,212 during the previous decade, many of the state’s Free Black population lived in the Ohio River counties, particularly around Jeffersonville and Madison, in Clark and Jefferson counties respectively, both major crossing points for escaping slaves.

In February of 1831, the Indiana legislature was responding to protests coming from counties bordering the Ohio that, in addition to the presence of fugitive slaves, Kentucky slaveholders were taking their aged and infirmed slaves into Indiana where they would be manumitted for the sole purpose of avoiding the costs of caring for the former slaves, according to accounts relayed to the state legislature. As a result, Indiana passed legislation requiring all free persons of color entering Indiana to register at the county seat and post a $500 bond. The alleged purpose of the bond was to dissuade slaveholders from freeing a person who might then become a ward of the local community. Enforcement of this controversial law was spotty with southern-border counties likely to maintain at least a registry if not actually attempting to collect the prohibitive bond. Many counties further north ignored the law altogether. Wayne County, home to one of the state’s largest Quaker populations including Levi and Catherine Coffin who resided in Newport, about nine miles north of Richmond, has no record of even a registry for the county’s sizeable Free Black population.

A New, Dark Phase for the UGRR

In late August of 1831, Levi Coffin was among a handful of Newport’s residents openly assisting fugitive slaves on their way to Canada. By this time, Coffin was part owner of a dry goods store, a successful processor in the increasingly lucrative pork enterprise and a budding land speculator. He had successfully transitioned from his birthright lot of farmer and part-time Sabbath school teacher to a respectable businessman. Though it’s reasonable to assume many of his neighbors didn’t approve of his participation in assisting slaves, antipathy against his actions had not prevented an impressive business record built in only five years since his family’s arrival.

But following the wave of, by then, embellished accounts of the horrific ends met by white women and children at the hands of Turner and his confederates, there can be no question of the view Coffin presented to his neighbors. No longer was he the eccentric business owner who sheltered runaways; he now harbored the specter of Nat Turner among Newport’s families.

Compared to newly freed African-Americans living in Coffin’s home state of North Carolina and in Kentucky and Tennessee, Coffin’s looming problems were small. As mentioned in a previous post, North Carolina would include in their new constitution of 1835 a provision requiring newly manumitted blacks to leave the state within 90 days. Both Kentucky and Tennessee enacted similar laws providing those who failed to depart were to be sold back into bondage for a period of one year. While Levi’s fellow Quakers were divided as to the means of ending slavery and a majority then still opposed to violating the law even to assist fugitive slaves, the Friends’ response to the dilemma faced by newly-freed blacks in nearby slave states was laudable.

Levi Coffin’s classic autobiography, “Reminiscences of Levi Coffin,” describe how Quakers in Indiana corresponded with fellow Quakers in slave-holding states such as North Carolina about the plight of Free Blacks with little means of leaving their native states and even fewer means of resettling in Free states. The novel solution arranged and coordinated among the Friends was to establish what can described as a full-service relocation effort on behalf of newly freed human beings. Quakers in North Carolina provided wagons with drivers and provisions and then relocated the former slaves to Indiana’s numerous Quaker enclaves in the east-central part of the state. There, Indiana Friends provided essentials including farm work, rental properties in which the freepersons could live and basic foodstuffs. The success of this large-scale transfer of entire families can be seen in census figures.

Indiana’s free colored population as described in the Fifth and Sixth Federal Census showed significant growth during the 1830s. Free Blacks had increased in number by over 67 percent to slightly more than 6,000 persons in 1840, but digging down further into the records, that same population showed the largest gains in counties with large Quaker populations. Wayne County’s Free Black population doubled during the 1830s, while New Garden Township, in which present day Fountain City is located, experienced an increase of over 600 percent according to census records.

Today, scholarship of the Eastern third of Indiana’s Underground Railroad provides a clear picture of the various routes taken by Freedom Seekers on their way to Canada. Coffin himself identifies Jeffersonville and Madison, Indiana as well as Cincinnati and Ripley, Ohio as crossing points for fleeing slaves from Northern Kentucky who passed through the Coffin’s home or village. From Newport, Wayne County, Indiana, the continuation of the avenues of flight is also well documented. But another compilation of facts is similarly known, though not associated with the body of evidence tracing the paths of fugitive slaves.

As Indiana’s Free Black population grew at an accelerated rate following Nat Turner’s Revolt, these new immigrants lived in clusters near or within Quaker meetings. The locations of these Free Black Settlements are matters of record and have been the subject of a good deal of research and scholarship. What has been overlooked is the correlation between these known settlements and the northern progression of Underground Railroad routes.

Coffin describes three distinct routes of escape from his home in Newport. North of Wayne County is the Quaker-settled county of Randolph. Three of Indiana’s largest Free Black Settlements existed in Randolph County until the Compromise of 1850 as well as the advent of a major rail line bisecting the county a few years afterwards. These locations naturally became well-protected harbors for fleeing slaves – as did most points further north.

Directly north of Newport, above the small town of Lynn, Indiana was the Snow Hill Settlement. Today, US 27 closely follows the path to freedom taken by African-Americans as they passed through and around the city of Fort Wayne, then into Michigan where Ontario, Canada saw hundreds of souls step onto free soil for the first time in their lives.

Below Farmland, Indiana was the rural Black Settlement area known as Cabin Creek. From Newport, fugitives would travel northwest a day by wagon to the settlement before heading north into Delaware and Grant Counties where other black neighborhoods and settlements existed. Cass County, Michigan received many Freedom Seekers who traveled this route, again with the major crossing point into Canada, Detroit, the last station in country still permitting slavery.

Following what’s known as the north-south Quaker Trace running just east of Coffin’s location was the largest of Randolph County’s settlements. Divided by the state border with Ohio, the Greenville Settlement spanned both states between the towns of Spartanburg, Indiana and Long, Ohio. Those sheltered by the Free Blacks, many of whom had been in bondage in North Carolina, Tennessee, Virginia and other Slave States before “purchasing” their own freedom or manumitted and forced to leave, travelled to Sandusky, Ohio, known for its strong anti-slavery activism. There, abolitionists ferried the weary seekers across Lake Erie into Ontario, Canada.

Other factors played prominent roles in the migration of free persons of color to Indiana as well as Ohio and Illinois. Public sentiment beyond the United States as well as in many parts within our nation’s borders made clear the institution of slavery was becoming unacceptable. Differences in agrarian practices across the upper, middle and deep south saw changes in demand for slavery, while economic costs of maintaining slaves too young to work or too old or those incapacitated by the toil made, from a purely mercenary standard, the keeping of slaves an unprofitable enterprise.

Coinciding with Turner’s rebellion was the fiery rise of an increasingly organized abolitionist movement best illustrated by William Lloyd Garrison’s radical pamphlet, The Liberator, first published in 1831. All of these circumstances contributed to the causes of the large scale migration of Free Blacks to Indiana, but none served as a greater catalyst for this Diaspora than the bloody consequences of Nat Turner’s violent resistance to slavery.

Like domino pieces falling to form an unbroken, cascading path from bondage to freedom, Indiana’s Free Black Settlements became the stepping stones of the Underground Railroad in that part of the Midwest. It is unlikely Turner had any inkling his actions would provide the secure safe houses, in cooperation with a small minority of Whites, saw so many once held in chains delivered from evil. 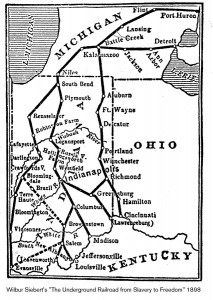 In all of American History, less than one in 400 slaves ever escaped slavery by way of the Underground Railroad. One-quarter of one percent is no doubt a low figure among border states such as Maryland and Kentucky, while high when applied to Alabama and Mississippi where distances and an ever-heightened fear of slave revolts prompted strict control of movement and the widespread use of brutality as a general deterrent.

There will never be a consensus as to the moral appropriateness of Nat Turner’s actions, nor will the question of culpability be resolved for those died at the hands of Turner and his fellow resistors to slavery. Those in the slave-holding society had long dread an armed slave uprising, in itself a damning indictment that society knew of the iniquity of owning fellow humans. Turner did not end slavery, but he did put in motion events that resulted in the freedom of hundreds. This fact can’t be separated from any judgment of his actions or by those who owned and traded in human flesh.