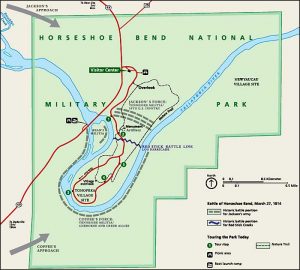 Much of what we learn about Andrew Jackson and the War of 1812 centers almost exclusively around the 1815 Battle of New Orleans. However, what is now the Lower South was the site of some of the most sanguinary fighting of the war.

It was on this date in 1814 that militia forces under the command of Andrew Jackson soundly defeated a large force of Red Stick Creeks at the Battle of Horseshoe Bend in what is now Alabama.

The study of this particular theater of the war brings to light the elements of two European empires, the British, and Spanish, as well as the often complicated reactions by Native Americans to the increasingly rapid encroachment of their land by American settlers.

As with the previous defeat of Indigenous people in the Northwest Territory during the early 1790s, American forces took full advantage of divided factions among Native Americans, pitting allied American Indian forces against those defending native territory. The Creeks were, in 1813-14, engaged in a civil war with the Red Sticks opposing those Creeks generally accommodating white settlers and adopting parts of their culture. 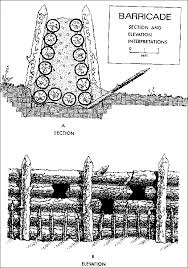 When Jackson’s forces attacked the impressive fortifications made by the Red Sticks at the peninsula caused by a horseshoe bend on the Tallapoosa River, it was the enveloping action of Creek forces allied with Jackson that made possible the breaching of the well-constructed barrier facing the main force of militia. The slaughter that followed included women and children.

Jackson’s victory at Horseshoe Bend bolstered his reputation beyond regional bounds and his role in defeating British forces nine months later at New Orleans solidified a reputation that would one day play a major role in his election as president. As for the Creek Nation, the Red Sticks no longer posed a threat to white settlers or their opposing brethren. Over the next decade and a half, practically all Southern lands once controlled by Native Americans were ceded to whites who cleansed the newly acquired territory culminating in the Trail of Tears. 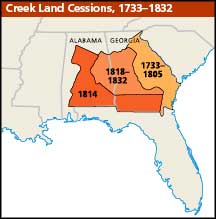