Thoughts on a classic 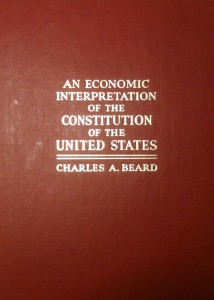 Published a century ago this year, Hoosier born historian Charles Beard examined assumptions about the creation of our nation and its guiding document.

I’m not proud of the fact that I’ve only now begun to read the late Charles Beard’s classic work, An Economic Interpretation of the Constitution of the United States. However, now that I’ve cracked this book open, I’m learning some compelling facts about both the text and it’s author. My intent is to blog about my reflections as I make my way through this landmark examination published one hundred years ago. 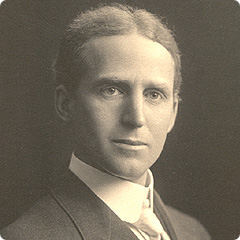 This image, taken when Beard was a faculty member at Columbia University when he wrote An Economic History as well as other influential works.

The edition I’m reading is the 1998 version, (second printing), with an introduction by the late Professor Louis Filler, who retired from Antioch College. In Filler’s introduction, I learned that Beard was born near Knightstown, Indiana, a thirty minute drive from my own hometown. Beard’s ties to my home state become more significant than the happenstance of birth.

DePauw University in Greencastle, Indiana is a private liberal arts college with a strong academic reputation. DePauw’s alumni include several governors, one vice-president, a famous Marine Corps general and a number of impressive academics.

One undergraduate student who attended DuPauw with Beard was Mary Ritter who would go on to be one of the nation’s leading suffragists. Ritter and Beard began their friendship and romantic attachment while at DuPauw. Following graduation, Ritter taught German in Greencastle, while Beard traveled to Oxford University to pursue his graduate degree. Upon Beard’s return from Oxford, the two were married and after living in England for a short period of time, they and their first child, a daughter, moved to New York.

Both Beard’s enrolled in Columbia, Mary as a sociology student, Charles a doctoral candidate. Pursuing complementary activities, Mary became involved in the local suffragist movement, soon rising to national prominence, while Beard received his PhD. and was soon offered work at Columbia. Charles Beard earned a full professorship where he also published scholarly work prior to writing the subject of this post. 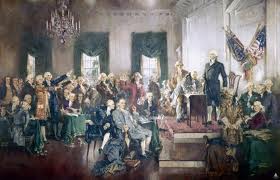 Howard Chandler Cristy’s 1940 painting depicting the signing of the Constitution. The painting hangs in the U.S. Capitol.

Today, scholarly and many not-so-scholarly books challenging various interpretations of our nation’s past are common. In 1913, however, the world of professional historians was decidedly parochial, particularly in regards to the founding fathers whose actions were revered, but not seriously examined. This time period was, however, the heyday of American progressivism to include the investigative journalism known as muckraking.

An Economic Interpretation of the United States Constitution is known, as it has since its publication, as unromanticized clinical study of the economic conflicts among our founders. It challenged, according the book’s author as paraphrased, the oversimplified view that the strong debate over ratification boiled down to the emphasis on a strong central government versus states’ rights. Beard’ work is most notable as being one of the first to use primary sources and cold data to flush out the economic interests of the times, each with their own geographic implications, but with economics leading geography in the creation of our present form of government.

As I read the text of Beard’s book, I’ll reflect in subsequent post my thoughts and reactions to a century old book that had such an influence upon American historians during the first half of the 20th century. I’ll also seek out additional reviews about contemporary influences on the study of history.

I invite any and all, especially those with a good knowledge of Beard as well as his 1913 text to comment on my blog.