Gettysburg: A question of cost 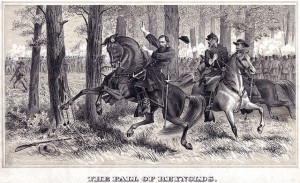 “The Fall of Reynolds”, by Alfred Rudolph Waud. General Reynolds was directing the Iron Brigade early on the first day of battle.

For all its fame, its glory, its countless acts of sacrifice and honor, for all of the reverence now bestowed, Gettysburg was a costly, missed opportunity for the Union. As we honor, and rightfully so, those who fought to preserve the Union during this sesquicentennial of the great battle, a full appreciation must  consider the political cost of defeating, but not destroying the Army of Northern Virginia.

By the end of June 1863, General Robert E. Lee, commander of the Army of Northern Virginia was well aware of not only the tactical opportunity of crossing north of the Potomac, but of the blow to Northern unity a Confederate victory would surely cause. Northern enthusiasm for the war was waning and calls for a negotiated peace gained in resonance due to a combination of factors.

By mid-summer of 1862, the combined populations of both sides in the Civil War were disabused of any notion that the war would be quickly resolved with acceptably low casualties. Still reeling from the long list of dead and wounded from the 2nd Battle of Bull Run, or Manassas  if you will, another decisive Confederate victory, a single day’s cost in blood at Antietam would eclipse all previous losses for an entire campaign. The romantic civilian notion of war was doused by reality.

By this same time the very prospect of a draft had satisfied the needs of both sides through volunteers. Those who had initially signed on for service in the North did so for relatively short duration reflecting the belief of a quick victory. Those first volunteers came to be contemptuous of the poor leadership in the Union Army and as casualties rose, desertions began to increase in numbers. 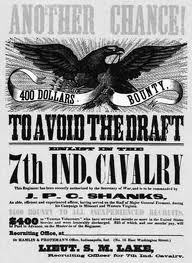 Many states and even counties matched federal bonuses for enlisting in an effort to avoid the politically unpopular option of conscription.

In July of 1862, President Lincoln signed into law our nation’s first ever national draft. Individual governors were responsible for meeting state draft quotas, prompting the practice of offering bonuses for those who enlisted rather than be drafted. Provisions for exemption to military service in the form of purchasing draft substitutes also created a highly-charged resentment between the lower and upper class.

By the summer of 1863, a new draft, the first of four more authorized before the end of the war, drew violent protests to conscription, particularly in cities with large immigrant populations. The most notorious of these, the New York Draft Riots, erupted only two weeks following the last volleys fired at Gettysburg. Irish immigrants, many still new to the United States, were reluctant to fight for a country that showed little love for their presence. One other factor became the focal point of violent resentment by the immigrants, one by no means limited to immigrants.

Justifiably concerned of formal recognition of the Confederacy by England and France, President Lincoln’s preliminary announcement of the Emancipation Proclamation countered this potentially fatal threat to the Union. Issued just after the nominal federal victory at Antietam, the preliminary declaration presented an ultimatum to those parts of the United States in rebellion to cease their revolt or have their slaves declared free. Of course this action did not effectively free any slaves, but it did change the nature of the war’s purpose. Northern white resentment to the Emancipation Proclamation, fearful that former slaves would take jobs held by poor working-class whites fueled, in part, the growing disapproval of the draft.

A string of Confederate victories

Had the South prevailed at Gettysburg it would have marked the fourth consecutive victory in a span of just more than seven months for the Army of Northern Virginia. Fredericksburg, the abortive Mud March of January ’63 and Chancellorsville had decisively thwarted union attempts to capture or threaten Richmond and provided Lee the momentum to invade the North for a second time in a year.

At Gettysburg, Lee was confident not only in victory on the battlefield, which he nearly achieved, but in bringing the federal government to the negotiating table with Jefferson Davis’ Confederacy.

High water mark of the Confederacy?

More than any other battle fought during the American Civil War, Gettysburg and it’s every detail have taken on legendary status. A decisive Union victory, it is commonly known as the high-water mark of the Confederacy. This distinction is supported by the fall of Vicksburg on the 4th of July, adding to the count two rare wins for the Northern cause. There is, however, a compelling argument that Gettysburg’s significance, monumental by any standard, ignores one important fact.

By not following up on the victory at Gettysburg, General Meade’s failure to destroy the Army of Northern Virginia before it escaped back across the Potomac to the sanctuary of the Confederacy, northern opposition to the war remained a powerful incentive for Jefferson Davis’ government to continue the war. It has been argued, and I believe convincingly, that were it not for the fall of Atlanta in the fall of 1864, and Farragut’s victory at Mobile Bay, Lincoln would likely have lost his bid for a second term, defeated by his former general George McClellan. As it was, McClellan garnered 45 percent of the popular vote by campaigning for an armistice and the restoration of the Union with slavery intact. 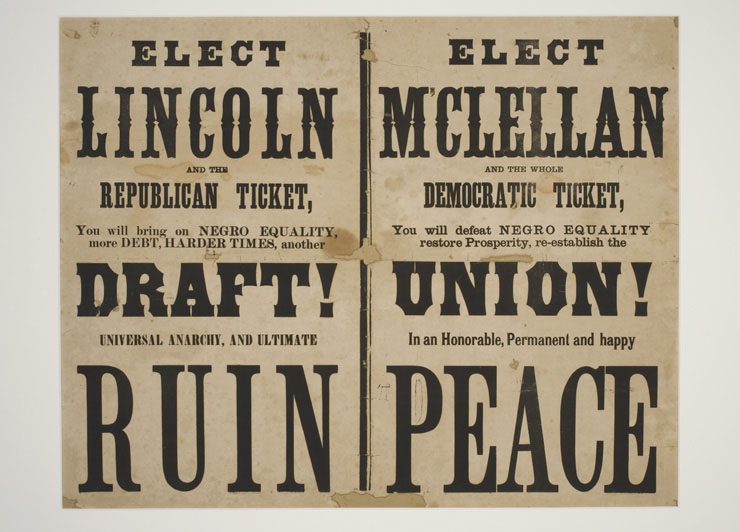 Doubtful of his own reelection, Lincoln arguably prevailed in November due to very recent Union victories in the Deep South. Many voters sensed that a final victory was finally near at hand.

Prior to what became known as Bloody Shiloh in mid-April of 1862, one year after the attack on Fort Sumner, each side had suffered total casualties of just over 80 thousand men. For the North, no weekly casualty figures exceeded 5,000, losses that were stoically borne by those not doing the fighting. Volunteer levels were adequately meeting War Department demands. Then came news of the costly Union victory near Pittsburg Landing in Tennessee.

At Shiloh the North received more than 13 thousand casualties. The South, lost nearly 11 thousand, 6 thousand less than at Fort Donelson, Tennessee two months earlier. Northern newspapers reported the staggering losses to a public not yet prepared for such consequences in human lives, but still unable to fully comprehend that these casualties would become increasingly common, if not moderate. 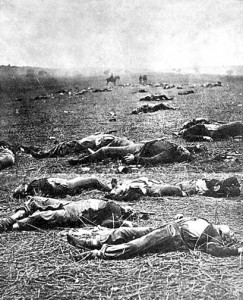 Union dead after the first day of battle, July 1, 1863. Digital Library of Georgia

At Gettysburg, it is estimated that at least 51,000 combined casualties was the cost of battle, the greatest total of any engagement of the war. For the Union, whose losses at Gettysburg numbered 23,000, two subsequent fights, The Wilderness and Spotsylvania Courthouse had Northern losses of 18,000 in each battle. Three other major battles saw Union casualties with average losses of over 13,000 in each engagement.

The legacy of Gettysburg

For Jefferson Davis, Lee’s Army of Northern Virginia did not have to win the war, which nearly happened at Gettysburg, to achieve the political aims of the Confederacy. Fighting to a draw, as writer Tony Horwitz points out in his June article in the Atlantic, could still achieve the South’s goals. By not following up, by not closing with the defeated, vulnerable Rebel army, George Meade guaranteed another 654,860 casualties before Appomattox. This is the legacy of the Battle of Gettysburg.