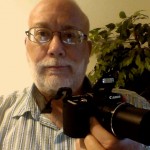 Author and his new camera

Timing for this past weekend’s mini road trip was the arrival by mail of a new-to-me digital camera. Plans for expanding the scope of this blog made clear that a digital camera with some zoom capability was essential. A determined bit of research led me to my choice and I found a barely used model on Amazon that was affordable and appropriate for my requirements. Though the mail came about an hour later than usual, tracking features had already alerted me that my Canon PowerShot 500 IS was on board the carrier’s vehicle Saturday. After receiving my package and quickly ascertaining that the device worked, I headed to my parent’s house, my boyhood home, with a full agenda in mind.

I spent Saturday night doing the only thing more fun than eating a Royal Feast pizza from the destination of choice during my high school weekend dining, Clara’s, that being sharing that pizza with my eighty-something parents who helped devour the pizza with the relish of hungry teens.

A visit to the Richmond Art Museum

Sunday afternoon marked the start of my museum visits. The event I attended at the Richmond Art Museum, (RAM), was the highlight of the weekend’s impressive destination visits. Fellow Northeastern High School graduate, Shaun Dingwerth, Executive Director of the museum, delivered to a very well attended auditorium a presentation opening the current show.

The Richmond Group Artists: Out of the Silence, runs through October 4th at the RAM and features two galleries dedicated to the display of work created by members of one of only two artist colonies in Indiana’s history. The show closely follows the recent release of the magnificently done book, The Richmond Group Artists, authored by Shaun Dingwerth. Not only is the quality of rich images detailing an expansive body of work exceptional, the level of research evident in the authoritative prose was, for me, awe inspiring.

The greater Richmond area, in fact, the whole of Indiana has reason to be proud not only of the body of work left to posterity by the colony of artists who painted in and around Richmond, but by the talent of Mr. Dingwerth. A day trip for which the RAM is the sole destination would not be regretted. 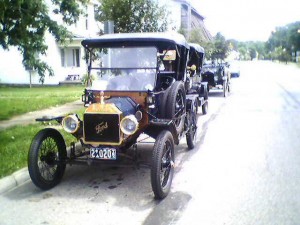 A line of Model Ts line US 27 in front of the Levi Coffin House, a popular destination for owners during the 2008 centennial.

Like many area residents in 2008, I was highly skeptical if not dismissive of the Model-T Centennial celebration coming to Wayne County, Indiana. Like even the most skeptical at the time, the moment I first witnessed a procession of restored Model-T’s meandering through the area licensed from all points of the compass, I immediately became a fan.

The story of how Richmond, not Detroit, became the site of the centennial celebration is compelling, but a matter perhaps for another post. An unqualified success, the festivities led to the location in Wayne County of the official Model T Ford Club of America’s museum. Recently relocated to Richmond’s up and running Depot District from it’s initial location near Centerville, Indiana, the museum had been on my list of sites to visit for several months. Following my memorable visit to the RAM and after a quick visit to the Whitewater River Gorge, which I’ll write more on tomorrow, I stopped in to see the small museum.

As the only visitor at the time, not surprising given the near-perfect summer day, I received a thorough tour by museum manager, Justin Mitchell, a perhaps late twenty-something native of Wayne County, whose enthusiasm for the collection and history of Model Ts clearly ran deep. I knew very little about the finer details of the Tin Lizzy’s history, but I left feeling as if I’d received a helluva lot of value for the three dollar admission fee I paid.

I was quickly disabused of the myth all Model Ts were produced only in the color black during the vehicle’s long run from 1908 to 1927. Until Henry Ford adopted the assembly line practice, Model Ts came in several colors, such as red and green, as represented by cars on display at the museum. The black limitation was introduced from 1914, the year Ford began using the assembly line and continued until the final, (I believe), two years the vehicle was produces.

All of the vehicles at the museum run, or at least can quickly be made to run. The diversity of the Model T was a curious surprise to me. Hanging from the ceiling was a small aircraft powered by a Model T engine. My Dad, a former pilot, alerted me to this feature some months ago and had since visited the museum specifically seeking out the plane. As Dad was also the local rural mail carrier for nearly forty years, I took note of the Model T snowmobile heavily modified by the owner during the 1930s for use as a winter mail delivery vehicle.

What we today would call after-market kits sold via mail order gave the famous car its spanning utility during its production and beyond to this day. One form of adaptation is credited with a rural cousin to the Model T.

According to Justin, when Henry Ford became aware of Model Ts being modified for use as tractors, a rarity as a farm implement during the years coinciding with World War I and immediately afterward, Ford pitched the idea to company investors of creating an inexpensive tractor. The company initially balked at the idea, some investors allegedly skeptical of the tractors future acceptance. Ford created a prototype of such a tractor and in 1917 formed Ford and Son, Edsel being the son, and began producing what quickly became the Fordson tractor with its distinctive gray body and Ford red steel wheels. Two of these tractors are on display at the museum.

My final and most important take away lesson from the museum had to do with one major reason the Model T is more rare today than the Model A which was produced following the T. (There did exist an earlier Model A, but little is known about that version, the familiar Model A designation beginning in 1928.) The Model T saw many of its kind donated to patriotic scrap drives, first during America’s involvement in World War I and later following Pearl Harbor, when the cars would have been old, but not yet valued so much as antiques.

In tomorrow’s post I’ll relay my experiences of Sunday’s brief stops and Monday’s trip to the site of the greatest victory over the United States Army by Native American forces, a location roughly thirty-five miles north of my family’s home.