Today it’s harder than ever for third party candidates to get on the ballot – and to get noticed. Green party candidate Jill Stein was recently arrested for a sit-down protest. Stein was making a public statement about being denied a place in the debates. Libertarian Gary Johnson held his own “debate” by commenting on questions from a debate between the two main candidates.

But while the British media, and even most of the American media, has ignored third party candidates since Ross Perot, third parties once got more than a passing mention at least in the British press.

As Seen From Across the Atlantic 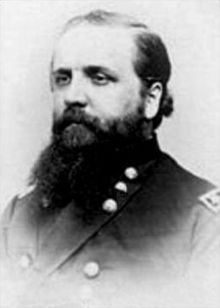 In addition to letting us know who the Republicans and Democrats nominated, the British press let us know who could take a significant amount of votes from either party. Men like General Fisk were already known in the British media in 1888, and his candidacy was mentioned in many newspapers.

“The prohibitionists, who are now a most powerful third party, and may be potential in mixing matters in the “doubtful States,” have nominated General Clinton B. Fisk, of New Jersey, for President, and John A. Brooks, of Missouri, for Vice-President.”

Fisk was known in Britain for more than just a dislike of booze. When printing a little blurb on his platform, British papers noted that “women’s suffrage” was included. He was considered one of the three candidates by some papers, and his nomination got about as many mentions as those of the other two candidates.

Among his policies included in more detailed reports were equality between religions and races. For decades before the election, Fisk had been noted in the British media for his work among unemployed southerners during and after the American civil war. His vigorous work on behalf of the Tennessee Freedman’s Bureau was honored by the naming of Fisk College, which gave an opportunity to African Americans to study. These stories got bigger mentions in England than a lot of presidential acts.

Fisk was often a guest at Christian conventions, and during the election of 1888 he was notably absent at a missionary meeting. The Methodists seemed to be pushing equal rights for all, regardless of religion, gender, or ethnic background, as well as going for the prohibition of liquor. But, we often forget today that women’s suffrage was tied into religious proselytizing.

After Fisk lost and died two years later (in 1890), he was given glowing obituaries by the British media. Some called General Fisk extreme in his views on liquor.  Some preferred to leave out that element of his life altogether, and focus on his charity work, and the way he helped southerners get back to work, and get an education after the war, mentioning that he helped men of every “colour.” They’d mention that he ran for President, but not always mention the party’s name.

By contrast, British coverage of the Democratic platform of 1888 focused on the Constitution and especially the 10th amendment (which protects states rights). Also mentioned were debt, the economy, and the negative effect of “over-taxation”.

The Democrats accused the Republicans of taxing public land and giving it over to “corporations and syndicates, alien and domestic” and the Democrats claimed that in their tenure they helped to get this land back, for the people to use for their homes and livelihood.

The Democrats had mentioned “a firm and prudent foreign policy, preserving peace with all nations, while scrupulously maintaining all the rights and interests of our own Government and people at home and abroad.”

But, with two major parties to report on, and all kinds of happenings in the British Empire and elsewhere, why did British papers pay attention to a man who only got two percent of the American popular vote, and zero percent of the electoral vote? And, why is Fisk almost forgotten today?

Fisk could take away votes from either of the main parties, both of which repeatedly fail to get an outright majority of the popular vote. “To secure re-election to the Presidency,” the press reported, “Mr. Cleveland must add to the 153 electoral votes of the Southern States, which he is reasonably sure of again securing enough others to give him the necessary 200, which is a majority. To do this, he must carry New York.” Cleveland went on to win the South who still voted Democrat in remembrance of the War of Northern Aggression and who supported the Democrat’s states rights platform Cleveland had generally supported in his first term.

We now remember that Cleveland received the most popular votes of any one candidate, but did he really “win” the popular vote? He had less than half the total of those who voted. Was voter turnout lower in some states because they felt that Mr. Cleveland won their state anyway? I (the author) have witnessed many people from safe states in this 2012 election proclaim they are voting either Libertarian or Green, because they lived in “safe” states, but suggest their vote would have been different had they lived in a swing state. I assume that some people voted tactically in 1888 as well, although it’s impossible to tell how many.

The Electoral College diminishes of the importance of third parties in the records. History forgets that third parties almost always had an important part to play, that getting more than 50 percent of the popular vote is not always the norm. The media gives us a circus on who is expected to win which state, painting the map blue and red, with “undecided” states being stripped, pink, grey or purple. In the late 19th century, one such swing state was New York. The South was loyal to the Democrats, many Northern States still remembered the bloody shirt and would only vote Republican, but New York was a different issue. New York had a lot of Democrat sympathizers, even during the war.

But the Electoral College was not painted as unfair by the British media in 1888. One of the two major parties got a higher popular vote than the other, but considering that neither achieved a majority, the issue of legitimacy is still debated? If the Electoral College resulted in a tie, the contest would go to Congress, as it had done before. Congress can – in theory – choose a third place presidential candidate as the winner. Of course, such a scenario discounts almost any effect of the major two parties in such a drastic rejection of both majority candidates. In retrospect, however, some obscure alignment of electoral stars might have produced a President Fisk!

Vasco Phillip de Sousa is a writer and media producer with a customer service and design background. Vasco has written for several magazines and has created films and websites for a variety of clients. Samples of his work can be seen at Ptara.com.