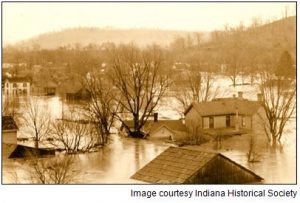 Easter Sunday, March 23, 1913, is generally considered to mark the beginning of a five-day period during which the Ohio River and its major tributaries overflowed their banks, causing cataclysmic flooding across its entire watershed. When the local waters began to recede and Mississippi helped carry away floodwaters, more than a thousand people were dead. To date, only the Johnstown Flood of 1889, (2,200), claimed more lives due to flooding not caused by hurricanes.

Throughout the Midwest, January saw much warmer than normal average temperatures and greater than average rainfall. Some rivers experienced flooding, saturating the surrounding grounds of the floodplains.

During February, the northern reaches of the Ohio River saw floodwaters recede, but further south, the Ohio River and its major tributaries such as the Wabash experienced water levels at or above flood crest. The Mississippi simply couldn’t relieve the overflow. Rain also continued to fall heavily in the region during the second month of the year.

The familiar pattern of warm, moist air from the Gulf of Mexico making its way up the Mississippi River Valley until meeting cold, dry air from Canada produced tornadoes beginning on Good Friday, March 21. Twisters popped up that day in Alabama and Texas, killing several dozen, as other low-pressure systems developed further north.

On Easter Sunday, a powerful storm system moving west spawning tornadoes that struck Omaha while another storm landed a tornado in Terre Haute. The following Monday that same storm struck  Albion, Michigan, east of Jackson, destroying an iron mill. The Easter Sunday tornadoes claimed 274 lives according to one account.

While tornadoes smashed their way across the central part of the United States, a pair of low-pressure troughs from the Canadian weather system began to dump more rain still on the waterlogged land.

The second round of heavy March rains began on Easter Sunday. By the 24th, rivers began to spill over their banks. Dayton, Ohio’s Great Miami River flooded the town with nearly twenty feet of water in the downtown. From Cincinnati to Cairo, communities along the Ohio River saw flooding as much as eight feet above previously recorded water levels.

In Indianapolis, the White River stopped rail and trolley service as its downtown was flooded. The Wabash spread to seven miles wide between Vincennes and Terre Haute. In the Franklin County seat of Brookville, the Whitewater River rose to the second story of houses in lower elevations of the town.

The United States of 1913 prided itself on the idea of local self-sufficiency and a paucity of, (local), government assistance. Private civics groups such as the nascent Rotary Club raised impressive sums of relief dollars. From across the nation, benefits brought in tens of thousands of dollars to be distributed in communities worst his by the tornadoes and floods.

The federal and state governments also picked up some of the tabs for rebuilding damaged cities, towns, and farms. The American Red Cross, then a very small organization, grew to national prominence as it helped with disaster relief in the Midwest.

Despite admirable efforts to restore the region, flood-borne diseases like Diptheria took their toll on the survivors of nature’s wrath. Typhus, a disease carried by lice, ticks, and infested rodents, also killed many in the flood’s aftermath.

Nature’s reality slowly began to chip away at the quaint notion that disasters and their causes were local matters. Comprehensive planning to mitigate flooding along the country’s major waterways began to yield federal legislation. States recognized that flooding recognizes no county lines nor boundaries with other states. Ohio led the nation in flood control when in 1914, Governor Cox signed the Ohio Conservancy Act, allowing regions to form conservation districts. Neighboring Indiana followed suit as did several other states.

At the federal level, a series of programs to address flooding began starting with the Flood Control Act of 1917. This effort continues to this day with new programs and modification of long-standing flood-prevention efforts occurring with some regularity.