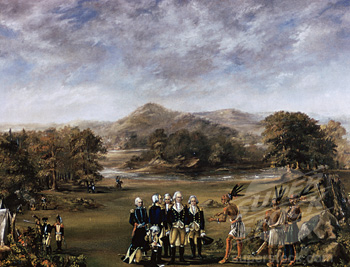 Treaty of Greenville, painted in 1805. While the paining’s artist is unknown. the style is that of the American School.

When I was five, my family moved from the small, rural town of Fountain City, Indiana to “the country,” roughly two miles east. The unpaved road that ran past our newly built ranch had only one other residence along its three-quarter mile, the other a small farm. The nearest paved thoroughfare lay between our house and “the town” bore the curious name of Boundary Road. Running north-south, this road corresponds to the boundary established by the 1795 Treaty of Greenville.

At the time of our move into the home in which I would live until I left for the Marines, Daniel Boone, portrayed by Fess Parker, appeared in a weekly TV series that captured my imagination. Awareness of how the land west of the Boundary Road was rich in early American History was hard to miss for a young boy who roamed the woods and creek bank animal trails that surrounded my home.

Wearing on my head a simulated coon-skinned cap Mom fashioned for me from a tanned rabbit pelt and a raccoon tail, (attire Daniel Boone was never known to have worn),I was drawn to the nearby log cabin built soon after the turn of the 19th century. No one had lived in the structure for decades and the roof had gaping holes that allowed the rain that eventually warped the supports for the second story floor, but for year I would explore the log home, imagining life during the cabin’s first few years.

The cabin was located about one hundred fifty yards to the north of my home. Running along the eastern border of our family’s acre of land is a small creek that winds south and then east until it joins Buck Creek about a half mile west where we lived. Following this small waterway, and from it one of the many rabbit paths running south, I “discovered” the old Dwiggins’ grave site, the final resting place of a Quaker family that was among some of the earlier residents of New Garden Township, whose main village was Newport, later renamed to the present Fountain City.

On the high ground just east of the Dwiggins homestead is where I’d occasionally notice very old, rounded clay bricks scattered about, visible when a good rain would wash away the soil that hid the old relics. They were the only extant artifacts from the simple stockade fort, one of the county’s thirteen such defensive structures thrown up just prior to the formal beginning of the War of 1812.

At that time, anxiety among the white settlers was high that the local Miami would join in raids against the settlers as the Shawnee had done in some southwest areas of the state. There are no recorded instances of actual fighting between the settlers and the Native Americans, but the fort spoke to a shift in the relationship between the early settlers and the original natives since that August day in 1795 when the Treaty of Greenville was executed.

Spending my youth in such an environment, I was familiar with the early local history, though it was not until my mid-thirties when I began to make much larger connections to our nation’s history and that momentous pact signed a mere twenty-five miles or so northeast of my home.

The Treaty of Greenville’s details are, themselves, straightforward. The main elements of the agreement between the United States’ federal government of George Washington’s second presidential term and ten major tribes are outlined in the treaty’s ten articles. Some of the points include:

Of the several provisions, one stands out today contrasted against a known history. From Article V, “…the United States will protect all the said Indian tribes in the quiet enjoyment of their lands against all citizens of the United States, and against all other white persons who intrude upon the same…” 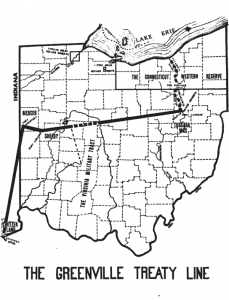 The treaty line established across Ohio and a sliver of neighboring Indiana was comprised of essentially three legs. Beginning at the mouth of the Cuyahoga River near present day Cleveland, south to Fort Laurens in Tuscarawas County, then west to Fort Loramie, near Sidney, with a slight bend up to Fort Recovery, opposite the state line from Portland, Indiana. From there the line runs in a straight line to the northern bank of the Ohio opposite the mouth of the Kentucky River. It is along this leg that Wayne County’s Boundary Road is located. The history preceding the treaty tells a fascinating story I maintain is grossly undervalued by contemporary history curricula.

A neglected milestone in early United States history, Treaty of Greenville represents a conquest nearly fifty years in the making. During the course of that conquest, American colonists fought two wars against the most powerful nations in the world and a prolonged campaign against the Native Americans who owned and occupied what was known as the Ohio Country.

I intend to write at least two more posts on the events that led up to the famous treaty’s execution, one on the speculator’s role in driving two wars and another on the so-called Indian wars fought during Washington’s two terms in office.
In these subsequent entries I’ll reveal how surveyors, including a young George Washington, traveled at great peril into the Ohio Country at the behest of wealthy land speculators. As the population of the original colonies grew exponentially during the mid 18th century, available land east of the Appalachian mountains became more scare and more unaffordable for most. Standing in the way of this tempting opportunity were three nations. First to be challenged were the French. Then came the British. Finally, if not throughout the period beginning in the late 1740s and running through the treaty of August 4, 1795, were the Indian nations, the remnants of whom are now scattered in Oklahoma.