Blood on the threads 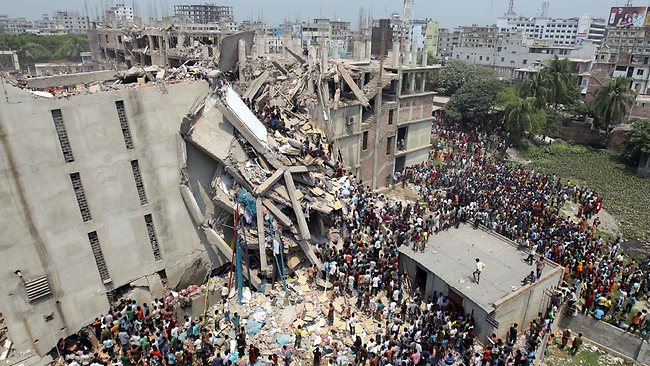 Yesterday, initial reports from Bangladesh tell of how, so far, 256 souls perished in a garment factory collapse. The death toll will no doubt rise as more bodies are uncovered. As history is truly prologue, there is little chance that any substantive change will result from this most recent loss.

In the late 1830’s, abolitionist Levi Coffin joined in a national movement called the Free-Labor Movement. It was an economic attack on the institution of slavery. At the heart of this moral crusade was the notion that wearing or using products such as cotton or other items produced by slave labor perpetuated bondage.

Coffin and other abolitionists went so far as to secure plantation cotton and cotton gin mills in the South that did not use slave labor. In their stores in the North they sold only products made without slave labor.

As we now know, the movement was a colossal failure. By the late 1840s, Coffin, who had moved to Cincinnati to run a free labor warehouse, saw his venture fail and he never fully recovered from his economic loss.

More than a century later, TV host Kathy Lee Gifford was genuinely shocked to learn that a line of clothing she promoted was made by sweatshop workers in, underdeveloped nations. She testified before a congressional committee investigating overseas sweatshops. That effort, resisted by the garment manufacturing industry, resulted in the county of origin’s name being affixed to labels. In other words, it’s perfectly fine to allow products made under sweatshop conditions to sell their products as long as we consumers know that child labor and inhuman conditions were used to manufacture the goods.

Like the Free-Labor movement, the labeling of clothing failed miserably in its aim to end an evil practice. We buy with wallets, not with our hearts. As I write, it occurs to me that I have no idea from where the clothing I no wear comes. For all I know, the inexpensive items in my closet were made by hands now stilled by the crushing effects of collapsed concrete.

In an age no longer in the realm of living memory, the economic convenience of slavery did not end until approximately 650,000 lives were extinguished. Millions more lives were spent in bondage, the root cause being the demand for cheap labor and high profit.

No invisible hand ended slavery in America. Free markets will not prevent more deaths of sweatshop workers in America or elsewhere in the world, such as Bangladesh. As intended, labeling regulations are nothing more than victory pennants for the garment manufacturing lobby and the shared avarice of that industry and we consumers.

Morally, it’s hard to make the case that we’ve learned from the past. More damning is that we know what evil we’re perpetuating. A century after such tragedies as the Triangle Fire, our national mood is not one of reform, but of further minimizing workers through right-to-work laws and anti-regulatory zeal. The dead in Bangladesh, Pakistan and Texas receive fleeting moments of mourning, but our wallets will remind us not to grieve too long.