At 10:18 p.m. on July 17, 1944, a pair of explosions at the Port Chicago naval pier killed more than 300 military personnel and civilian workers. The event caused the largest number of stateside deaths during the war. In the aftermath of the explosion, it was determined that racism played a key role in an accident many believe might have been avoided. 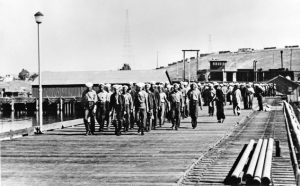 Tasked with loading ammunition were mostly African-American sailors serving in the segregated U.S. Navy. Neither the enlisted sailors nor the white officers detailed to supervise those loading ammunition onto merchant ships were trained in handling the high explosive shells. Adding to an already dangerous task was the common practice of rewarding or punishing the sailors based upon tonnage loaded into the holds of waiting ships. The pace of loading for the African-American naval crews was, in fact, greater than that of civilian stevedores trained to perform such precarious work.

Docked at the pier that summer night were two U.S. Merchant ships, the SS E.A. Bryan and the SS Quinault Victory, the former’s holds already loaded with roughly 1,500 tons of high explosives and ammunition. On the dock was another 200 tons of ammunition waiting to be loaded into the Quinault Victory. The crews of both merchant vessels were on board at the time of the initial detonation, believed to have occurred on the dock. The second explosion, likely a sympathetic detonation that happened seconds after the first, occurred in the holds of the Bryan. Within a few seconds of the blasts, 320 persons were dead. Nearly 400 more were injured. 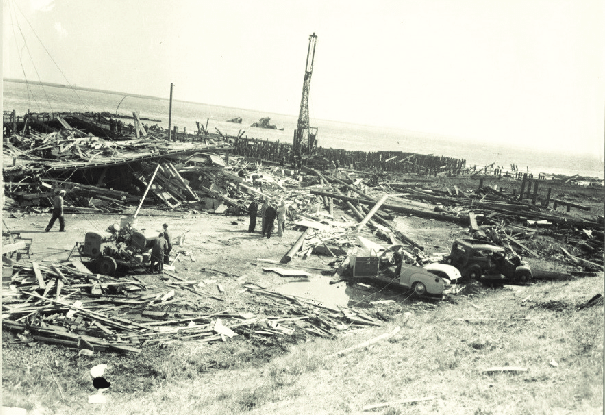 Rescue workers begin to clear debris. Seen in the bay are the largest remaining parts of Quinault-Victory.

Those not injured by the explosions quickly organized and began searching for survivors, treating the wounded, and recovering the dead. Of the latter, only 51 were positively identified. Within three days, the first official investigators arrived from Washington D.C. The second installment of this post will reveal an injustice still not remedied to this day.