There seems to me a common thread that runs through impassioned references about the Declaration of Independence, that being a profound lack of basic knowledge of the historical document’s content. Worst among all claims relating to our nation’s celebrated artifact is the use of the Declaration by non-secular con artists whose livelihoods are made duping the willfully ignorant.

I can think of no worse example, no more damning evidence to support claims that our nation was founded as some quasi-theocracy than the Declaration of Independence. Beautifully written, the Declaration is a memorial to The Enlightenment in general, and secular government specifically. The Second Continental Congress was not just announcing the severing of all political ties from a nation, but from a monarch. What makes this most unheard of for the times is the rejection on philosophical of an obligation to be ruled of a king whose authority is ordained by none other than God.

Even if you overlook the hypocrisy of a congress that excised all reference to slavery in the Declaration, (which alone should take some of the reverence felt in the 21st century towards our official statement of separation from The Crown), the two passing references to our Creator and divine providence, added after the committee draft was submitted, you can’t reasonably ignore the secular nature of the rest of the document.

Collectively, our treatment of American History has been deplorable long before standardized testing dealt its horrid blow to critical thinking. We treat biography with no meaningful distinction from fairy tales and our written artifacts are revered with all the care of a Hallmark card, if that. I’m not claiming to be surprised by the ease with which the Declaration of Independence is marketed with contempt for the truth, but I sure hope that what should be self-evident truths about our country’s secular status can get something close to equal time with the downright lies about our national origins. 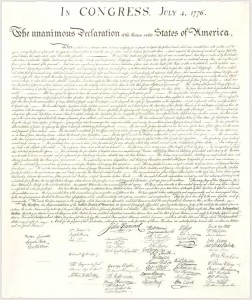