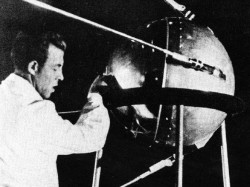 On October 4, 1957, the Soviet Union launched the first manned space satellite, Sputnik 1. Though then President Dwight Eisenhower knew well in advance of the impending event, his calculations as to the American public’s response to Sputnik proved greatly underestimated. The sense of vulnerability felt by a majority of Americans prompted a renewed interest in public education. As with many of the reactions to Sputnik’s highly publicized orbits, public education policy was based largely upon myth, insecurity and political exploitation.

By early 1957, what can now be called the early American space program was by all accounts the best in the world. It’s advances in rocketry, through the efforts of former Nazi scientist and S.S. officer Wernher von Braun, had yielded the ability to launch a satellite in early January, but political considerations put such a feat on hold until after the Soviets were first in space.

According to accounts of recently declassified memos by the Christian Science Monitor, Eisenhower wanted the Russians to be the first to launch a satellite, thus downplaying America’s own launch. Ike’s end game, according to the article, was to creat a “new principle in international law” that left space beyond the claim of any nation. Capitalizing on America’s great lead in science and rocket propulsion, the United States could use satellites as orbiting spies without protests from the Soviet Union over whose earthly territory the satellites would fly. But of course that type of strategy was not the sort of information the administration could share with the public. It was in this vacuum that Ike lost the battle of public opinion while ultimately winning the war for space espionage.

The Cold War was barely a dozen years old when Americans learned of Sputnik. Many could see the sun’s reflection from the satellite’s rocket booster that, once disengaged from Sputnik 1, followed it’s orbit. (With strong binoculars or a telescope, Sputnik itself could be seen from earth.) Most, however, “heard” Sputnik.

Radio and television stations picked up the satellite’s VHF signal consisting of a series of beeps. These transmissions were recorded and rebroadcast to the public, the audible data signals igniting in the minds of many the darkest of Cold War fears.

Unaware that U.S. knew of plans to launch the tiny satellite and that Soviet rocket technology was limited to not much more than propelling two hundred pounds of payload, roughly the weight of Sputnik 1, understandable implications shook the nation’s collective confidence. This uneasy mood was not ignored by Eisenhower’s political foes as well as others interested in greater funding opportunities.

Seizing on the anxiety of the time, Senate Majority Leader Lyndon Johnson led the political criticism against the administration. Among the greatest myths to grow from Sputnik was that Russia was doing a better job of educating its citizens in math and science, a popular notion that likely gave von Braun a good chuckle.

Within a year of Sputnik’s launch, Congress responded be creating a sweeping new education bill, the National Defense Education Act, (NDEA), providing funding, mostly at the college level, for science and math resources. Hoping to attract more student to enter the science field and hopefully apply their knowledge to national defense applications, the NDEA did spur a renewed interest in science and math. Other developments, however, gradually wore away at what turned out to be a relatively short interest in science education.

Self-doubt wins over evidence every time

Following Sputnik 1, the United States experienced a series of highly publicized, spectacular launch failures. Images of huge, expensive rockets exploding either on the launch pad or while en route to space served only to reinforce the nation’s self-doubt about its education system. However, the attention given to science education soon fell in the face of the rise of the Civil Rights Movement and the realization the the U.S. was not actually far behind the Soviets in the space race.

By the time Neil Armstrong stepped foot upon the Moon, the enthusiasm of a decade earlier for science education was dissipated by more earthly concerns. Even the monumental accomplishment of that Apollo mission was not enough to overcome the cynicism of the times. The war in Vietnam had divided the nation beyond the point of civil unrest, the issue of poverty brought into question the morality of moon landings as a priority and the Cold War sensibilities that prompted the NDEA were then suspect.

Winning the Space Race came at a cost. With the exception of the near-tragic Apollo 13 mission, moon shots became relatively common. Been there, done that is not a helpful attitude for increasing spending on a space program, and even less helpful for sustaining interest in educational funding for science.

By July of 1969, many began to realize that the United States had never, in fact, been lagging behind the Soviets in science or education. As a result, interest, let alone funding for science education drifted off in the early 1970s as energy shortages and inflation captured the fickle attention spans of Americans.

By the early 1980s, amid a renewed wave of anti-government sentiment that included public education, national defense was again used to drive education policy. This time, a report made by a commission formed by President Ronald Reagan, A Nation at Risk, concluded that the state of public schools posed a danger to America’s ability to compete economically in a growing world economy. Like the response to Sputnik, Americans embraced the argument and launched a new industry, test-based education.

Since then Congress and every administration since Reagan has enacted various legislation based upon the assumption that American’s public schools were in need of critical care. While the NDEA was the carrot for improving science education, legislation such as No Child Left Behind, (NCLB), and administration initiatives such as Race to the Top proved to be the stick, this time placing much of the blame on teachers.

While math and science became the focus of education reform in 1958, math and reading are the contemporary targets of NCLB. School district funding and now teacher pay are tied to test scores in these two disciplines, among other factors. The resulting behavior was always predictable. 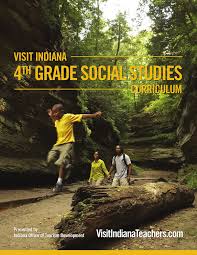 In 4th grade, my already strong fondness for history was supplemented by that year’s Indiana History curriculum. The following year, U.S. History and basic civics heightened my love for Social Studies, Since becoming a social studies teacher in 1998, I’ve enjoyed the various opportunities to teach students of all ages my favorite subject area. However, in the past two years, the nature of teaching these topics has changed as a direct result of America’s willingness to embrace or at least tolerate the cult of teaching to the test. Those who deny that this is the essence of our current state of education reform are uninformed, blinded by false optimism, dishonest or some combination of all four.

I’ve spent a good deal of time in elementary classes these past two years and I’m always anxious to share with fellow teachers my time, resources and knowledge to boost their social studies units. But there’s a problem.

In most – most – elementary schools, social studies is simply not taught or “covered” only cursorily a few minutes each week. I couldn’t believe this at first until the reality became too commonplace to deny.

Little to no Indiana History is taught in 4th grade. Social Studies in 5th and 6th grades may receive, at most, one hour of attention each week with that section subject to elimination to accommodate special programs, non-history testing or neglected planning. Math and language arts, reading and writing, now make up the dominant focus of the finite instructional time. The improvements in these instructional areas over the past decade are no doubt remarkable, but they come as a cost.

Of course, salaries and funding are either not tied to social studies scores, only recently an addition to the areas tested. But ironically, there’s on other discipline that receives almost as little attention as history. That subject is science.

In, again, most upper elementary classes to which I’ve been exposed. science education in the general classroom shares, if not competes, with social studies for instructional time. All schools I’ve seen do have a one hour block per week dedicated to science as a “special,” but no such block of additional time is given to social studies.

Despite having the world’s largest economy and being the sole superpower on Earth, Americans have once again shown their willingness to accept that our public schools have not contributed to our exceptional status among all nations. In fact, today resembles Sputnik in reverse. Few outside of teaching are outraged at the current neglect of social studies and science, yet fewer still accept that, as a people, we’re far too willing to doubt ourselves in spite of evidence to the contrary.