In these days where skills not readily measured by standardized tests are under-taught, teaching critical thinking skills has become something of a subversive act. Still, dedicated teachers know the importance of developing such skills among their charges. One of the most engaging means of taking history students to the levels of evaluation and synthesis is by exposing them to the dissenting views present in any historical event. Discovering how to identify perspective and bias among the evidence contained in written accounts is an experience that shouldn’t be put off until the junior or senior year of high school. In fact, the appropriateness of teaching this level of learning is often grossly underestimated for elementary students. The month of November offers an especially good opportunity to begin preparing students to become independent learners.

Enough turkey to go around

Each year, in countless elementary schools, halls are adorned with the cartoonish sight of Pilgrims and Native Americans sitting down to sup on what looks to be a Butterball. Squanto, the English-speaking Wampanoag,* is prominently displayed with no thought given to how a Native American happened to know the English language. Bearing what is truly the simple faith of a child, a youngster in fourth grade accepts these scenes and the accompanying craft activities as fact, setting the conditions for what can be some meaningful learning. 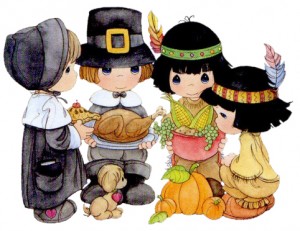 With many states selecting the year for teaching state history as fourth grade, units on the study of Native Americans often happen in November, culminating with some pre-Thanksgiving event held a day or so before a four or five day holiday break. This was the case when I taught a group of academically gifted fourth-graders in a rural school in Ohio. Coordinating with the regular classroom teachers at that grade level, I arranged to have this group of students come to my room for an advanced Native American study unit while the rest of the students remained for a more traditional unit of instruction. And that’s how the change began.

Jigsaw with a twist

For my unit, I first organized my small class into five reading groups. Each group had a different, ostensibly similar written account of the first Thanksgiving. One of the texts was the approved textbook account, the others included differing accounts, some less subtle than others, including one contradictory, though accurate version. The students were assigned to each individually read their group’s material and then collaborate on writing a common summary of the key events. This activity took several days of work with the summaries shared only among the group members who prepared the findings.

The Jigsaw Method remains both as popular and as effective now in the digital age as it was whenever the technique was first formalized. Using this method, I formed five new groups with a mix of members from each of the initial reading groups. The task for these new groups was to quickly share the summaries brought with them and then agree on a collective summary of what happened at the 1621 feast at Plymouth. What the students don’t know at this point is that each of the five accounts differs in perspective, detail and in many cases, fact. By adding a bit of urgency for the accomplishment of the summary task, that beautiful state of cognitive dissonance – so crucial for learning to occur – materializes in animated wonder. At this point, your role as teacher becomes one of safety officer as debates often turn heated among students who’ve had little exposure to questioning the material they’ve been given to accept on faith.

The balance of instruction time in this unit, in this case about four more class periods out of a total of ten, is spent teaching students to think. The debates have cooled to the point where only good questions by the students remain. By insisting that students identify evidence and then weigh that evidence, often times against contradictory evidence, the concept of bias becomes real. By including material from diverse perspectives, such as a letter by present day Paugeesukqs to then Connecticut Senator Christopher Dodd**, presenting a dissenting view of the First Thanksgiving, the understanding of bias leads to the realization that a historical event has many interpretations without any of them necessarily being false or inaccurate.

A word of caution

A warning needs to be sounded before teaching young people to think critically and independently. You’re likely to receive disapproving comments from other teachers. Your students will, forever more, speak out when they discover bias, recognize contradictory evidence and irrational conclusions in just about every textbook to which they’re assigned. When these conversations of concern begin to happen, you’ll know that you’ve produced meaningful results.

Author’s note: I’d appreciate hearing about other methods used to teach critical thinking skills, especially in the lower grades. If you found this post interesting or helpful. please share!