My own reference to American history begins with my birth only a decade and a half after the end of the Second World War, during the height of the Cold War. In my formative years, the Vietnam War caused a tumultuous schism among Americans, in part due to mutually exclusive views as to the nature of American military policy. What I believe is often lost on Americans is the fact that such debates were waged predating our current constitutional system of government.

Having presided over the creation of the new constitution, George Washington was in the first year of his administration when circumstances, as would be the case for each successor, confounded his most basic assumptions that were to have guided his policies.

Despite his extensive travels in the Ohio Country, which by 1789 made up a good portion of the Northwest Territory, Washington overestimated the willingness of settlers who’d rushed west of the Allegany and Appalachian ranges to feel closely connected to the Atlantic coastal states that made up the original thirteen states, let alone to the central government still located in New York, New York until December of 1790.

This tentative relationship between the government and the governed in the western reaches of the new nation was manifest in the respect, if not acknowledgement of treaties, specifically the 1783 Treaty of Paris. While that agreement is best remembered for officially ending the hostilities between England and its former American colonies, its details also granted to the United States all rights by the Crown to what is now Kentucky and what became the Northwest Territory. Not surprisingly, those inhabitants of that region were neither consulted nor present when the treaty was signed in France.

Washington made it known publicly that he wished a policy of share and share alike between white settlers and Native Americans. Unfortunately, if not predictably, those Americans who moved into the Northwest Territories and Kentucky often acted with complete contempt of protocol, be it federal or that expected by the Shawnee, Miami, Delaware, Kickapoo and others already in physical possession of the land.

Encroachment into the region often resulted in atrocities the sort of which Washington was all too familiar from his early days at the beginning of the French and Indian War. As a result, the only definitive use settlers sought from the new central government was military protection from the Native Americans without much regard for the behavior of those whites hungry for cheap land.

Recalling what started a revolution

George Washington was also familiar with the political repercussions of thwarting the desires of land speculators. Having first ventured into the Ohio Country as little more than a teen, Washington surveyed hundreds of square miles north of the Ohio River on behalf of rich investors who intended to acquire the King’s blessings to sell the land to settlers.

Several years later, our future first president’s attendance at the opening acts of the French and Indian War was no coincidence. Leading a company of Virginia militia and a band of Mingo warriors at the behest of assistant colonial governor Robert Dinwiddie who held claim to thousands of acres of land in the region, Washington’s men ambushed and routed a French force coming to establish negotiations with the British colonist. Among those French captured was Ensign Joseph Coulon de Villiers de Jumonville. The young Washington, then only 22, lost control over his Mingo contingent who promptly tomahawked the French commander and most other prisoners, igniting a new and undesired theater in the already world conflict of the Seven Years War.

When King George III issued the Proclamation of 1763, following the financially costly victory over the French and their Native American allies, land speculators like Washington were devastated. Prohibiting English subjects from crossing the Appalachian mountain range, let alone laying claim to land, was one of the major restrictions on colonist’s economic aspirations that led directly to the separation by colonists from their former King. Understandably, President Washington responded to calls for military protection in 1790, thereby creating a second dilemma for the chief executive.

Today, we Americans have come to accept, more so than at any time in our nation’s history, the concept of a massive standing peacetime federal army. However, at the time of our first presidential administration, any size of a federal army was a point of heated debate. Federalists, like Washington, Secretary of Treasury Alexander Hamilton and his successor in office John Adams both favored a modes standing army and held contempt for state militias based upon their relatively poor performance during the Revolutionary War. However, those like Secretary of State Thomas Jefferson and a great many other influential men saw a standing army as the greatest threat to liberty and democratic government. It was between the demands of western settlers and the contentious views held my many of his fellow founding fathers that Washington sent a succession of progressively larger federal troops into the Northwest Territory.

First of three contingents sent north from Camp Washington, (Cincinnati), to drive from the region the Native Americans who were dealing quite lethally with settlers claiming the 1783 Treaty of Paris as their right to set up housekeeping in the Northwest Territory. First came General Josiah Harmar whose soldiers attacked and burned undefended Indian villages near present day Fort Wayne, Indiana before being quickly ambushed by Miami warriors who’d been away hunting. Though recorded in history books as Harmar’s Defeat, the Miami warriors whose women and children had been chased from their burning homes by soldiers would recall the fight as the Battle of Pumpkin Fields, named after the sight of vapors rising from the freshly scalped sculls of the soldiers and militia. 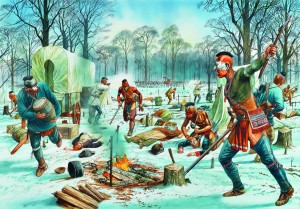 In what may be a generous depiction of the carnage at the Battle of the Wabash, artist Peter Dennis’s illustration from the book, Wabash 1791 suggests the fate suffered by nearly 800 whites in 1791.

General Arthur St. Clair, having been specifically warned by Washington himself to be especially cautious to the threat of ambush, followed Harmar to an even more disastrous, inglorious fate the following year. By comparison, George Custer’s last stand at the Little Big Horn in 1876 resulted in the deaths of about 230 troops. Not counting the nearly 200 civilians dead, (many dispatched after the battle by means of being burned alive at the stake), just shy of three times the number of soldiers killed under Custer’s command died at the headwaters of the Wabash in 1791.

Despite these losses, Washington and his Secretary of War, Henry Knox, had to exert considerable political pressure on Congress to appropriate funds for the creation of what was really the first well trained, capably led federal army in our nation’s constitutional era.

Mad Anthony Wayne went on to organize the Legion of the United States, delaying his operations to fight the native tribes until his force was equipped, trained and a supported by a chain of supply fortifications leading from Cincinnati to Fort Recovery, (1794), to Fort Wayne and culminating with the Battle of Fallen Timbers later in 1794. This victory was followed by the Treaty of Greenville in 1795, marking the end of a significant presence of Native Americans in Ohio.

History as Prologue – the cause of General James Wilkinson 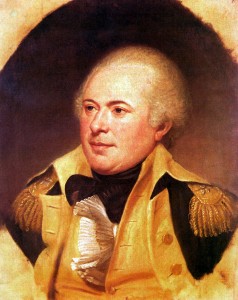 In what I find a fascinating thread of history is the story of General James Wilkinson’s role as Commander in Chief of the Army, a title not to be confused with the overall commander in chief designation assigned to the president. Wilkinson succeeded Wayne following the latter’s early death in 1796. Wilkinson would continue, with only a pair of brief intermissions due to courts martial – all from which he was acquitted – to lead the U.S. Army under our first four presidents.

During his tenure, and despite his outrageous schemes and scandals, Wilkinson did steadfastly advocate for the existence of an adequately funded standing army. His desires were usually frustrated until the conclusion of the War of 1812. By that time, it had become clear to most policy makers that state militia, perpetually underfunded by state legislatures and led overwhelmingly by political, not military men, could never perform as reliably as that of a professional, standing army, from which times of crisis would allow for rapid expansion.