No, history doesn’t repeat itself 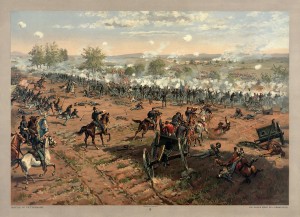 I’m as guilty as the next person of having blithely stated something no history teacher should ever accept, let alone utter. History does not repeat itself. Period. So what’s the purpose, the value of studying history if not to avoid making the same mistakes in the future? The answer has to do with avoiding bad questions, such as the one just posed.

Understanding the true value of history

The name of history teacher and author Bruce Lesh belatedly came to my attention in an article from The Atlantic. The article, High School History Doesn’t Have to be Boring has become a favorite of mine. The author, David Cutler, not only makes a case for why we history teachers should abandon the shamefully embarrassing – and almost universally tolerated – practice of straight, chronological presentation of dates, names and event to be memorized and forgotten after the test, but cite’s Lesh in clarifying why we teach history in the first place.

In a reference from Lesh’s book, “Why Won’t You Just Tell Us the Answer?”: Teaching Historical Thinking in Grades 7-12, the job of the history teacher is teach student to analyze historical evidence and then construct arguments logically supported by the evidence.

Borrowing from Lesh’s example of students some day making a presentation at work as to why a building should be located at a particular site, it’s silly to accept that some day a new technology will be developed based upon the knowledge of when the Battle of Gettysburg was fought. However, teaching history is about analyzing the many unequal causes of a past event and forming conclusions about that event.

Are there patterns in history? Sure, but the use of patterns without the context of what conditions led to such major events as the American Civil War is not sufficient for forming predictions, a goal of understanding several disciplines including science and social studies.

Likewise, there’s never going to be another American Civil War, at least not comparable to that fought from 1861 to 1865. There may be future political upheaval caused by demographic shifts, economic disparities and the rise of unchecked extremism within a political identity, but without any comparable institution such as slavery – and no such contemporary issue exists – the history of the American Civil War won’t repeat itself. The same can be said about The Great Depression, Nazi Germany or the Attack on the World Trade Center.

It would be wrong to jump to the conclusion this is to say there won’t be another cataclysmic economic crisis, a nationalistic dictatorship by a major power or even a successful large scale attack by terrorists. Regrettably, all three happenings are not beyond the realm of possibility. However, any of these will have its own set of causes and combinations of political alliances unique to that event.

Slowing for the bumps

While correctly identifying the critical causes of the Civil War is an important goal of teaching American history well, spotting flawed arguments is no less an aim in critical thinking. Evaluating source quality, bias and error are the necessary speed bumps on the road to discovery.

Revisiting a previous post, teachers need to pre-teach, teach and re-teach the foundational skills of research before assigning tasks beyond the present skill of a student. Imagine a world in which deceptive political ads weren’t profitable and you’ve imagined an outcome of using the teaching of history to produce a society of informed consumers of information. Though we’re a long way from that ideal world, there’s no good reason we shouldn’t try. But first, we need for there to be a better understanding of history’s value. A good starting point is to reject the myth that history repeats itself.