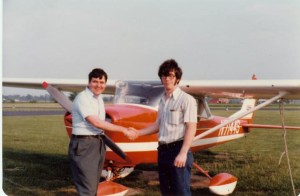 My flight instructor climbed out from the Cessna’s right seat and casually told me to “taker her up, fly the pattern, land and taxi back here.” Both of us knew I was prepared. It was my sixteenth birthday, the youngest age one can solo a powered aircraft. Thinking back on that still vivid memory, I can’t but help compare my first solo flight with the process of teaching research skills to students. In contrast, however, I know no flight instructor would ever leave an airplane in the hands of a student if he or she was as unprepared as most students now assigned a typical research paper.

My first time flying was with my Dad. He’d been a fighter pilot during the Korean War. I’d grown up listening to stories about flying the F-86 Sabre Jet and so wanting to fly at an early age was quite natural for me. Two decades after my father left the Air Force, he took up civilian flying, earning his Private Pilot’s license, which granted him the ability to take up passengers.

Like all young teens, I wanted to jump right into the Cessna 172 and take to the skies with Dad at the controls and me as co-pilot. However, as every pilot knows, you always start with what’s known as the pre-flight, short for pre-flight inspection, also commonly called the walk-around. No matter if you’re only planning a local flight that never leaves the general area of your airport or a long cross country, you always perform a very thorough 360 degree walk-around. If you find a problem, you don’t fly until the problem is completely corrected. No exceptions.

As a substitute teacher and having spent many days in multiple classrooms while running a gifted education program, I’ve witnessed scores of times the launching of research projects at every grade level. For most of those, my heart would sink as students wasted no time in their headlong attacks on Google. Predictably it would all go downhill from there. I say predictably because too many teachers assume their students understand why research tasks must be approached with the same care as a pre-flight.

Just as pilots inspects their aircraft for signs of defects that might compromise safety, teachers need to observe students through each step of the research process for signs of learning gaps. If a student jumps right into a search engine without having made a thorough study of the research task, that student should not be cleared to take off alone.

Pay attention to your instruments 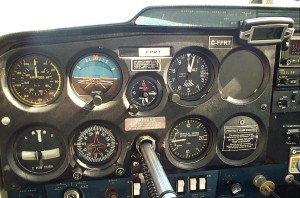 Several times a year my father would receive in the mail a bulletin from the Airplane Owner and Pilots Association, (AOPA), describing in clinical terms the basic facts concerning fatal crashes from around the country. Wings separated from fuselage often followed reports of pilots flying small aircraft into violent thunderstorms. Other grim phrases described pilots impacting the planet having ignored or not trusted their instruments, confident of their gut instincts right until the propeller struck. While botching a research project is unlikely to produce lethal outcomes, an observant teacher should constantly check for student feedback, including non-verbal input, indicating the student is drifting off course. Each step of the research process a student takes is like the information provided a pilot by the cockpit gages.

Safe flying is the repeated practice of good habits

I’d already spent an hour flying with my Dad, (who drove me to the airport as I’d not yet received my driver’s license), practicing takeoffs and the much more demanding landings before Bill Fisher arrived. He was my flight instructor and had also instructed my father while obtaining his Private License. While I have no doubt Bill trusted my father’s instructions to his son, he had me begin with a pre-flight on the little red Cessna-150 in which I was about to solo. Bill Fisher understood what all teachers should when assigning a research project; don’t assume it’s not your job to teach the necessary skills.

After a quick check ride to ensure I was familiar with emergency procedures, he had me taxi back to the tarmac near the end of runway two-seven, the runway’s abbreviated compass heading and direction of the prevailing winds. With the tips of my feet holding down the brakes, my instructor departed the craft after issuing his directions. When I returned from making single circuit around the patch, landing without bending the leased trainer Bill would sign my logbook and FAA medical certificate serving as my solo permit. He and my father knew I was ready to solo, though as a parent, I can now empathize with the natural anxiety Dad felt until I safely landed that first time by myself.

Aside from the rare appearance of a twin turboprop announcing his intention of entering the normally sleepy airport’s pattern, an unexpected occurrence requiring a young student pilot to extend his own pattern to accommodate the much faster airplane’s speed, my solo flight ended with a safe landing and proud taxi run back to the spot where my instructor had minutes earlier handed over the plane to a high-school sophomore.

Like safe flying, the application of research skills is nothing less than the repeated practice of good habits. Speaking as a history teacher, student achievement in my discipline is largely dependent upon my students possessing the confidence that comes with strong research skills. No teacher can assume the student knows how to properly research a subject or that teaching those skills is someone else’s job.

AUTHOR’S NOTE: I’ll define and defend my strongly held beliefs on what constitutes the research process in a subsequent article.