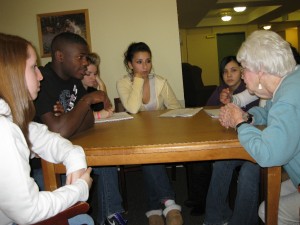 In the previous post I listed five essential skills students must have to access history in a meaningful way.

In this post I’ll focus on the first of these. For the remaining four, I’ll present supported lesson plans in individual posts addressing ways to teach these skills once your students have acquired a personal concept of historical time. With Winter Break over and the snow now cleared, students across America are returning to American History classes this month. A great many of these classes will bear striking similarities in practice to those taught a century ago – and that’s a problem. Organized by chronological order, curriculum for the typical history course is covered in approximately the same number of school days today as in 1914 in spite of the tumultuous century of events that have occurred during these last 100 years. Adding insult to injury, mandates from beyond the classroom – not learning needs – routinely determine the pace of instruction, specifying by week if not by day what topic is to be presented. The scope of this and the previous post is not to debate these flaws, but rather to provide a work-around for history teachers committed to teaching American History well.

Putting the horse before the cart 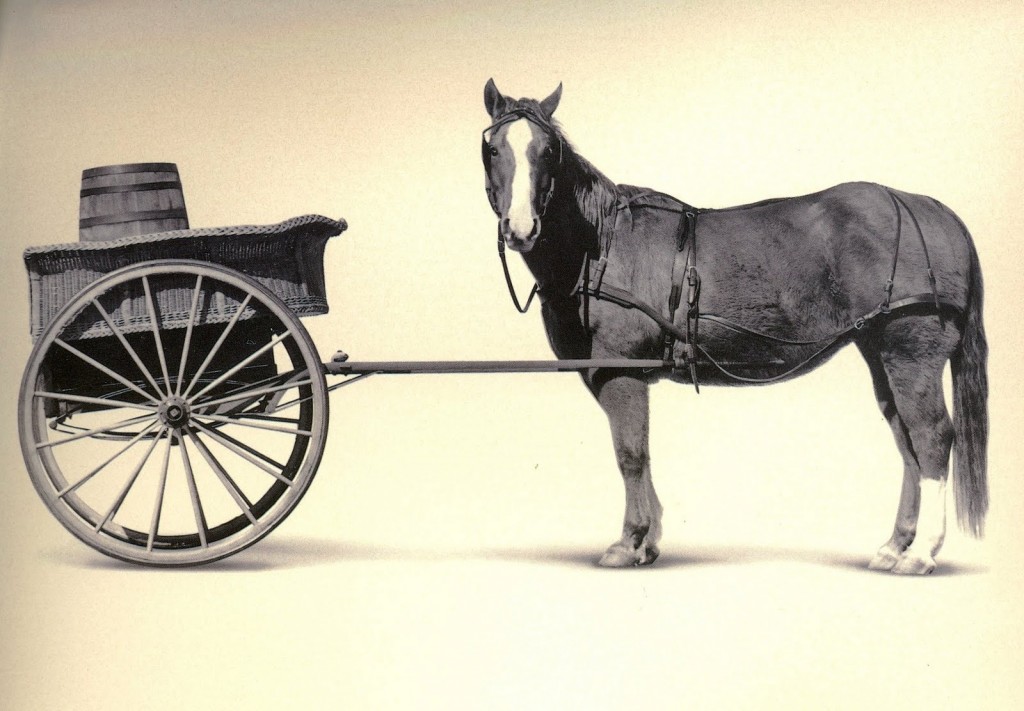 Chances are if you’re reading this post, you already have a personal interest in American History. That interest no doubt grew from many learning experiences which resonated with you specifically. Hearing a relative of family friend give an account of  his or her part in some notable, historic event or period is often the first hook we history fans feel. Perhaps its natural for us to assume – that our peers, and more to the point, our students, have these hooks too. When we make this assumption, we’re probably wrong.

History begins with the individual student

For the history teacher, changes in demographics are understood in the historical context of causes and effects. Why not incorporate this knowledge in how we deliver content to students? By having students, maybe for the first time, explore their own family history, you can provide that much needed historical perspective by students to your subject. Though some sensitivity needs to be built into such a project or assignment, the benefits will come in expected – and unexpected ways.

Every good lesson begins with a stated objective. For this lesson, that objective is:

The student will construct a historical timeline by generation from the present to 1850.

For those familiar with many state academic standards for social studies, this objective falls under the category of Chronological Thinking. This history lesson puts the student in the role of historian. While a junior high student may not be all that enthusiastic over the Northwest Ordinance, he or she is likely to find that a parent or aunt or uncle served in the Peace Corps, attended a world fair or witnessed a famous historical event. For many students, the opportunity to interview three generations prior exists, though in an ever-diminishing window of time. Though this lesson’s stated purpose is to gather simple data, I’m sure you can appreciate the unstated benefits of facilitating these conversations.

Generate interest in the assignment

Before class begins, select several well-known historically significant events from the past quarter-century. For example, 9-11, the election of America’s first president of African-American descent, Hurricanes Katrina and Sandy, Desert Storm, the wars fought in Afghanistan and Iraq and the Gulf Oil Spill are all likely subjects from which to choose as of 2014. List these events on whatever classroom display technology you use in your classroom, leaving space for several other student-offered events. Then prepare a second display to be shown after you present this first list. (See Prior Knowledge) When class begins, poll your students over which listed events they recall having had a family or family member discussion. Encourage students to then add several different events they’ve learned of from a family member, adding appropriate events to the list.

Informal survey of Prior Knowledge

On a separate display to be shown after the significant-events list, ask students to estimate which family member, past or present, was alive when the following events occurred:

This exercise should be conducted verbally, encouraging students to explain their answers. You may want to re-create this list on a PowerPoint slideshow, leaving the date blank until prompted. Once you’ve engaged your entire class with these two activities, you’re ready to explain and assign the main part of the lesson.

Using the worksheet shown below, explain to your students that they are to interview family members and record – anonymously – data for a class project. Reassure students that only they will have access to the worksheet, your only interaction will be confirming that they completed the assignment. To confirm that each student participates, assign a random, non-sequential, three-digit number to each student. Have the student record that number on the worksheet in the space provided after (Verification #). When the worksheet is completed, simply verify the work by having students show you a completed worksheet with the corresponding verification number. The student retains the worksheet at all times. Assign the students the task of interviewing parents and relatives in order to record dates of birth and death of either the paternal or maternal line of their family. For several reasons I suggest using the maternal line. 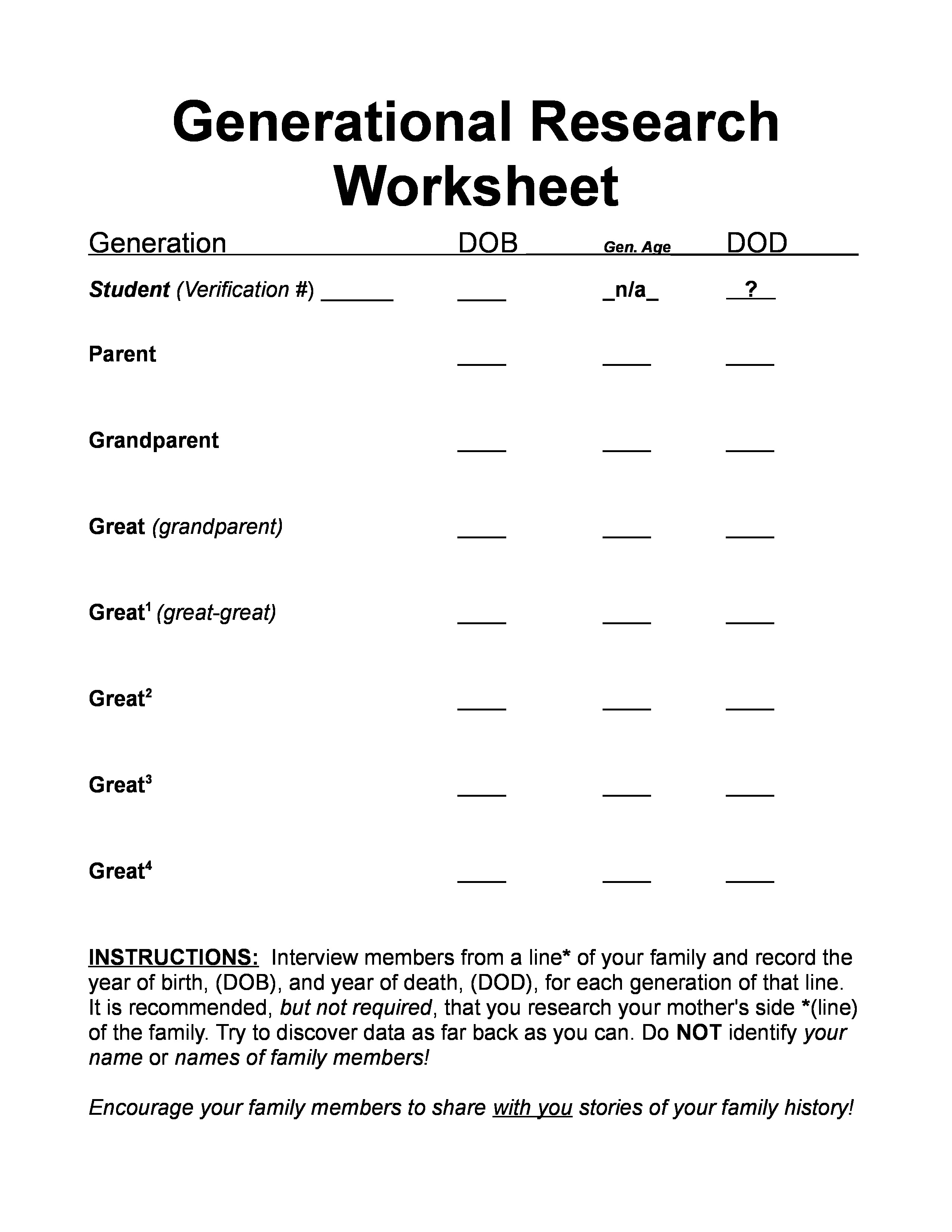 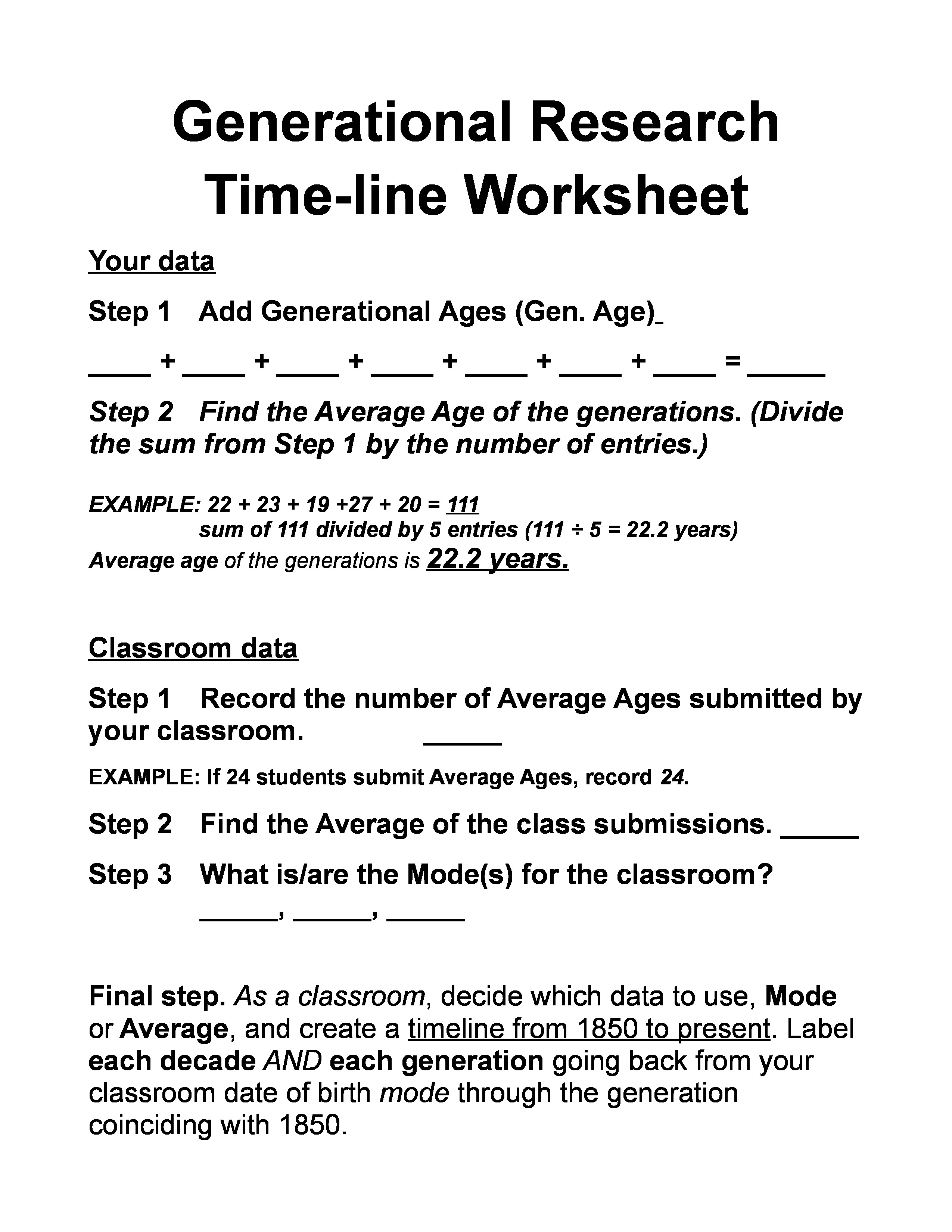 Go over the details of the worksheet, assign a due date of roughly five (5) days to include a weekend and then during each day briefly ask how the research is going, reminding students of the approaching deadline.

On the assignment’s due date, quickly begin posting on your classroom display medium, i.e. electronic white board, dry-erase or chalk board, the relevant data from the back page of the worksheet. Have each student in turn report his or her Average Generational Age while a student records for the class to see the rough data. After ordering the data from lowest to highest determine the classroom average as well as mode or modes. Now that you have an Average Generational Age for your classroom, you can construct a timeline to which you can refer throughout the rest of the year.

You’ll know your lesson was a great success if you find yourself struggling to contain the enthusiastic revelations made by your students – probably simultaneously. To bring order and closure to the class and to the lesson, break students up into small groups and have them share within the groups each student’s most unexpected discovery they’re willing to share. Later, after diffusing some of the energy I believe this assignment will generate, ask for volunteers to share one historic connection they discovered during the project. Close by returning to the list of ten events in American History from 1850 on, and using your generational data, determine which generation was alive at that time. Finally, don’t forget to use this information to make a personal connection with students when you cover an event in history.