Sparks of the Triangle Fire 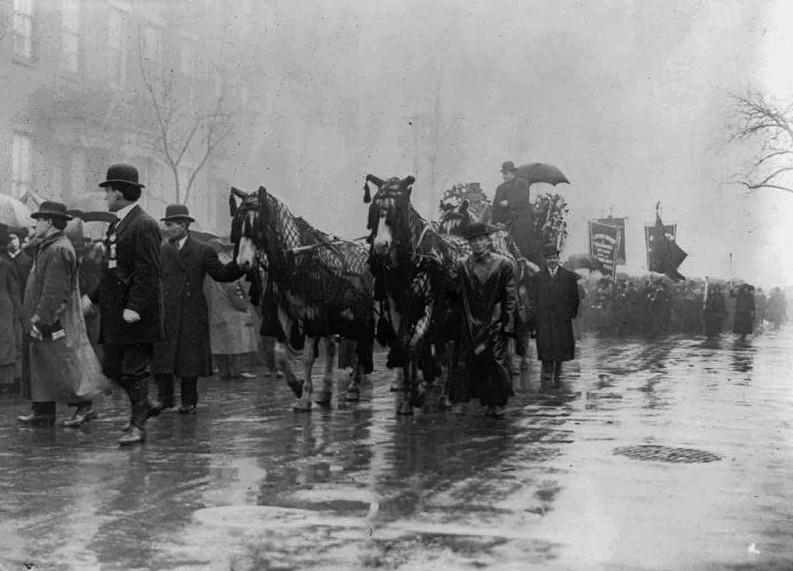 The ILGWU organized a funeral procession as a call to action.

On April 5, 1911, nearly a half-million people witnessed or marched in a symbolic funeral procession commemorating the victims of the Triangle Waist Company Fire. Organized by the International Ladies Garment Worker Union, (ILGWU), the cortege included a horse-drawn, empty hearse and an estimated 120 thousand protesters demanding improvements for the garment workers. Overlooked today, however, is a movement with roots predating the Triangle Fire, a movement that continues today.

7. Cortege
A cold rain comforts the sky.
Everything ash-colored under clouds.
I take my place in the crowd,

move without will as the procession moves,
a gray wave breaking against the street.
Up ahead, one hundred and forty seven

coffins float, wreckage of lives. I follow
the box without a name. In it
whose hand encloses whose heart? Whose mouth

presses the air toward a scream?
She is no one, the one I claim
as sister. When the familiar is tagged

and taken away, she remains.
I do not mourn her. I mourn no one.
I do not praise her. No one

is left to praise. Seventy years after
her death, I walk in March rain behind her.
She travels before me into the dark.

From The Persistence of Memory,
Copyright © 1983 By Mary Fell
Used by permission of the author

Speaking truth to power – in Yiddish

The history of the Triangle Fire is, of course, a study in civil rights in general and labor history, specifically. Like so many other topics in American history the perspective has been decidedly – and inaccurately – masculine. To understand the Triangle Fire and its role in the struggle for worker’s rights, one has to first see the event in light of the women’s movement.

Despite women accounting for the majority of New York’s shirtwaist workers in 1909, their trade unions were run by men. Though these men fought against powerful interests of the times, they did so as members of the privileged gender. As such, their sensibilities were, despite contemporary standards of today, still very much conservative in keeping with the times. Change, not revolution guided the actions of organized labor. For those roughly 32 thousand who actually toiled in the sweatshops of New York’s nearly 500 shirtwaist shops, a sense of urgency not felt by their male counterparts was incompatible to the day’s social norms.

Working conditions, wages and treatment of the shirtwaist workers, while never good, were becoming increasingly dreadful  by the end of the new century’s first decade. The shirtwaist as a fashion item was falling out of favor as designers were introducing new lines featuring long, more loosely fitting dresses, a departure from the Gibson Girl image that spawned the shirtwaist trend. Manufacturers responded to these changes by increasing quotas, cutting pay and extending workweek hours. As events would later attest, cutting corners on fire codes and adherence to the few regulatory safety standards became increasingly routine throughout the garment industry.

In response to these increasingly appalling circumstances, workers organized. In 1906, the ILGWU Local 25 formed to provide some leverage for garment workers. Though the leadership was overwhelmingly male, there were women among the union’s leadership. One such woman, Clara Lemlich, a 23 year-old seamstress whose family immigrated from the Ukraine only three years earlier, served on the local’s executive committee. 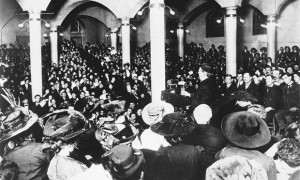 By late 1909, the mood among shirtwaist workers had become desperate. Among the nearly 500 shirtwaist shops in Manhattan, several small strikes had erupted in response to grievances ignored by employers. On November 22 of that year, thousands of garment workers gathered at Cooper’s Union to vent their frustration over the lack of progress made in curbing employer abuses. Again, it was the men who held forth at the speaker’s podium, including Samuel Gompers. While acknowledging the concerns of the workers, the men attempted to dissuade the workers from striking, citing several reasons all of which belied a prejudiced belief that uneducated immigrant women could not stand up, let alone together against the powerful manufacturers. 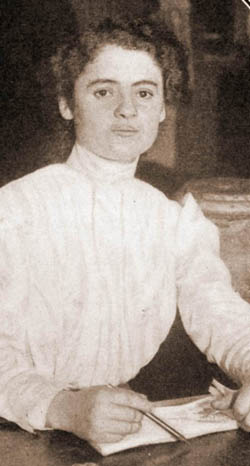 It was during a pause between male speakers that Clara Lemlich asserted herself by loudly insisting she be allowed to speak. Accounts differ as to where or not her bold call for a general strike was made in Yiddish, a tongue that would have been understood by a large number of those in attendance, but there is no dispute of her lack of patience with men who counselled only talk an no action.

Within two days, nearly 20 thousand shirtwaist workers walked off the job. Over the next several months, thousands more joined in the strike, this time in Philadelphia. Employers were swift to react.

The price and the cost

Though some of the smaller shop owners quickly negotiated agreements with their workers, the larger companies marshaled their resources in an effort to crush the strike. Those known to have helped organize the strike were summarily fired.

Scabs were hired to replace striking workers. Soon, however, with no change in work conditions or pay, scabs too began to walk off the job and join the picket lines. Business owners began to use less subtle means of breaking the strike.

Street toughs, former boxers and even prostitutes were hired to antagonize and beat striking workers. When picketers resisted, police, some bribed, some simply complying with expectations of those in power, joined in the violence and hauled in the strikers before unsympathetic judges. Lemlich herself, arrested 17 times for strike activities, gave her impassioned plea at the Cooper’s Union with broken ribs suffered while picketing before the general strike.

Despite these and many other hardships endured by the striking workers, a majority of shirtwaist manufacturers capitulated and agreed to have labor disputes mediated. All save one company, Lemlich’s former employers who fired her for helping to organize the strike – The Triangle Waist Company. 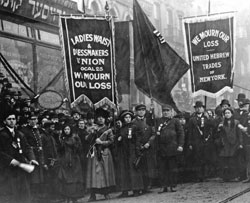 Over 400 thousand participated or witnessed the funeral procession despite unrelenting rain.

Shortly after the final survivor of the long fall from the 9th floor died, (six more would not be identified until a century later), the ILGWU organized a protest march to demand that action be taken in response to the conditions that led to the Triangle Fire.

Despite a steady rain that lasted most of the day, 120,000 people walked solemnly through streets of the New York’s Garment District. The date was April 5, 1911. A crowd estimated at over 300,000 lined the streets and watched from beneath umbrellas or simply braved the rain. A flurry of both legal and legislative activity ensued following the massive demonstration. Public outrage over the Triangle Fire was harnessed by more than just the labor movement.

Lessons from the sparks

Since that day, much has been written of the effect the Triangle Fire and the subsequent funeral cortege protest. The owners of the Triangle Waist Company, Max Blanck and Isaac Harris, were acquitted of manslaughter, though later fined in a civil trial. The insurance settlement paid the owners many times the cost of the fines. By 1913 they’d opened other garment factories. One of the factories was found to have had its emergency exit locked with a chain during operation. Blanck was fined $25 and received an apology from the judge for imposing on the businessman’s valuable time. Blanck responds by installing “safe” locks to keep tabs on his employees.

Suffragettes, whose gentile, wealthy leaders spoke out in support of organized labor for women quickly disappeared when even talk of a strike was uttered. They saw striking as a threat to their own class.

New York established a Fire Investigating Committee that tours the state and makes recommendations for new safety laws that address the very caused of the Triangle Fire. Years later, on the federal level, Francis Perkins, a live witness to the Triangle Fire, would serve as FDR/s Secretary of Labor. During her tenure, new national standards for worker safety were enacted reflecting lessons learned from the Triangle Fire and the organized attempts to prevent workers from organizing.

Still over a century after the Triangle Fire, sweatshops remain. Most exist today in Third World countries, though they are not completely uncommon in the U.S.

Organized labor once again finds itself fighting for survival with many maintaining that the need for workers to organize has long since passed. Borrowing directly from a tactic used by shirtwaist manufactures at the turn of the 20th century, a well-financed right-to-work movement has expanded beyond its traditional hold in the Deep South. 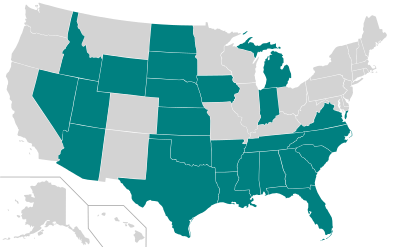 At the time of the deadly fire, the Triangle Waist Company was an open shop, a term meaning that employees need not join a union even if that union negotiated wages and safe working conditions. The intended effect was to dilute any power labor might wield while identifying to employers those workers who did belong to a union. Today, state laws now mandate the practice, virtually assuring dominance by business owners when faced with labor issues.

Finally, the fervor by reformers to harness the power of the government to protect more than the captains of industry’s interests has been extinguished by cynicism. Anti-government sentiment has once again given rise to belief system of the early 1900s – that business interests and market pressures will ensure safe working conditions and fair treatment of employees if left free from regulations.