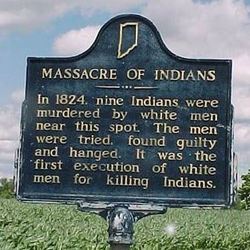 Several waves of temperance movements throughout the 19th century are often seen today as quaint extremism by a vocal minority. However, hard liquor was a significant contributor to a number of social ills including wanton killings. On March 22, 1824, heavy drinking combined with generations-old hatred of Native-Americans as the mass killing of nine persons was carried out along the banks of Deer Lick Creek, roughly seven miles east-southeast of Pendleton, Indiana.

Indiana was not yet a decade old when a party of seven white men, the youngest only seventeen, visited the seasonal camp of less than a dozen Seneca. The Native Americans are believed to have come from Ohio to boost their farming income with pelts taken along the local waterways flowing through an area in Madison County known as The Lick. When spring brought warmer weather, they would pull in their trap lines and return to their farming community.

Commerce between the American Indians and local white settlers was common. A decade had passed since the last significant warfare between whites and Indians, but hard feelings still existed among some of both cultures. Suspicion bred assumptions when trap lines were empty or when livestock went missing. Careless talk drew in others who found comfort in numbers rather than reason.

As detailed in the linked articles, a pair of missing horses led to a search party that included a father and son as well as a brother-in-law. Though no evidence existed to drive the thinking, at least one member of the party blamed the missing horses on the Indians camped nearby.

After a day of fruitless searching, the search party agreed to visit the trapping encampment the following morning. Liquor warmed the stomachs of the whites and clouded the initial purpose of the search. When, on the morning of March 22, the settlers arrived at the native encampment, lethal plans had already been concocted.

Accounts tell that the Native Americans, initially anxious about a party of armed whites approaching their camp were allayed by the request to join in the search for two missing horses. Payment for helping to find the livestock was even negotiated and two groups, each a mixture of whites and Seneca, took different routes ostensibly to find horses.

It is unclear when the murders began. One party stopped at an abandoned log cabin where settlers drank more alcohol before departing, allowing the male Seneca to lead the way. From behind, a father and son shot the two Indians accompanying them. One victim, mortally wounded, was finished off with several plunges from a long knife. When that same party of settlers returned to the camp, they met the other party, conspicuously absent of its Indian males.

The two adult female Seneca, one of whom was half-white and spoke English, sensed the fate their men must have suffered. Their dread was confirmed when gunshots fell both women, one killed instantly with a ball through her head, while the English speaking woman begged for her life as well as an explanation for the violence. Her inquiry was met with a lethal response. And then the children were murdered. 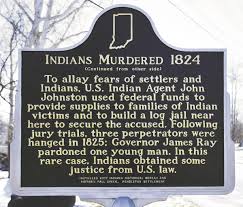 The story of what happened to most of the murderers is one for another day. The event is known as the Fall Creek Massacre, a geographic error naming the larger waterway that passes north of Deer Lick Creek after passing through Pendleton.

Arrests were promptly made and the accounts of what happened on the soil east of what would later become the present-day hamlet of Markleville, which lies on U.S. 38 between Pendleton and New Castle. A roadside marker commemorates the senseless killings.