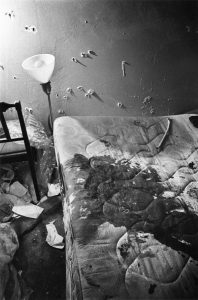 A subsequent investigation determined that the police, who were serving a warrant on the Chicago apartment, fired more than ninety rounds. The only discharge from any Black Panther member was the posthumous discharge of Clark’s shotgun after he was killed instantly at the onset of the raid.
Hampton died unarmed in his bed seconds after being awakened by the police fusillade.

In several states and in lone school districts across the United States, the telling of this event can get a history teacher fired, (not to mention threatened with violence by those triggered by dog-whistle terms such as Critical Race Theory).
If you’d like to know the philosophical origins of the Blue Lives Matter reaction to protests against systemic racism, Black Lives Matter, read up on Fred Hampton’s assassination.