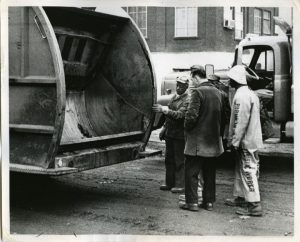 While 2021’s theme for Black History Month is, The Black Family: Representation, Identity, and  Diversity, the month of February has its own thesis. The first week of February includes the anniversaries of three crucial events in history. The Greensboro, North Carolina sit-in began on that date in 1960. Another dates back to the early days of Manifest Destiny. Yet another is the anniversary of one little known tragedy connected to one of great infamy. For more detailed information, as well as sources for this post, explore the History as Prologue Calendar.

It was in 1968 that two Memphis sanitation workers, Echol Cole and Robert Walker, were crushed to death by the trash truck on which both were working that day. Workplace deaths are often viewed as little more than regrettable accidents. These deaths were a direct result of systemic racism and anti-union zeal.

Taking shelter from a thunderstorm, the two African-American workers had no safe alternatives for avoiding the downpour. The city prohibited sanitation workers from taking shelter under business awnings or other public places. At the time, the three-man crew was heading to the landfill to unload their refuse when the antiquated truck’s compacting mechanism malfunctioned, pulling headfirst Cole and Walker into the crushing machinery.

At the time, Memphis sanitation workers were actively trying to organize, a move vigorously opposed by the city’s segregationist mayor. On February 12, the sanitation workers went on strike. Their slogan, I am a man, is now famous. Dr. King, busy working on other civil rights efforts, was convinced to make several visits to the Mississippi River port city where he supported the striking workers in their quest for economic justice. His last visit on April 4th ended with his murder.

Western conquest and the spread of slavery

When President Polk’s efforts to purchase large portions of Mexico, including New Mexico and California were curtly rebuffed, the pro-slavery president ordered the Army to provoke a pretense for war with Mexico in the spring of 1846. The dispute was in disputed territory between the newly admitted slave state of Texas and Mexico. American military might, though meager when compared to many European country’s armies, was vastly superior to that of Mexico’s even when fighting on their own soil.

At home, outrage at the rapacious conduct of the Polk Administration erupted in several memorable protests. A young congressman from Illinois hounded the administration on the floor of Congress demanding to know the exact location of the alleged Mexican incursion onto American soil. The nascent politician was, of course, Abraham Lincoln who served only that one term.

Another obscure politician was fooled by neither the pretense for war nor its implication vis-a-vis the spread of slavery. Pennsylvania’s David Wilmot offered his famous proviso that had it been adopted – it wasn’t – would prevent any state admitted from territory wrest from Mexico by the U.S. to enter the union as a slave state.

In 1847, Nicholas Trist, a Polk diplomat, was dispatched to Mexico. A temporary cease-fire was in place in hopes that Mexico would allow the U.S. to purchase New Mexico, California, as well as the Baja Penninsula. When Mexico’s president flat out refused to meet with Trist, a final campaign by the Americans captured Mexico city.

Trist independently negotiated the Treaty of Guadalupe Hidalgo, (named after the Mexico City location where the instruments of peace were signed in early 1848). This ended the fighting, but American troops remained in Mexico until the final terms were ratified by both countries.

Aftermath, slavery, and the coming insurrection 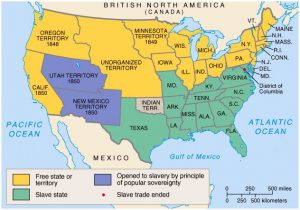 As it turned out, the 1845 admission of Texas was the last of the slave states to enter the Union before the attack on Fort Sumter in 1861. Of the territory acquired from Mexico, only California was admitted following the discovery of gold. It entered as a free state, upsetting what had been a carefully planned balance of slave versus free states.

One more event stemming from the War with Mexico was the peacefully negotiated Gadsden Purchase of 1853. The acquisition of a small strip of land below a corner of what is now New Mexico and the southern border of now Arizona was needed for a proposed southern transcontinental railroad. The plan, with its chief backer, Jefferson Davis, would have been a boom to the moribund southern economy, partly caused by limited market access for its slave-produced agricultural goods. The purchase was, in part, a gesture intended to calm southern resentment over the prospect of being an increasingly less influential minority among the states. As we know, however, a northern route was chosen by the federal government for both practical and political reasons. The admissions of Iowa and Wisconsin prior to California’s was followed by Minnesota, Oregon, and a much bloodied Kansas prior to the first official shots of the American Civil War.

The South’s ability to expand slavery essentially ended, the slave states chose to maintain their practice of holding African Americans as chattel beginning in April of 1861. The lives of more than 4,000,000 enslaved humans hung in the balance. This is why we commemorate Black history.